Heard the one about Tracy Morgan refusing to help his own mother pay the bills? The actor has responded publicly to the family drama. 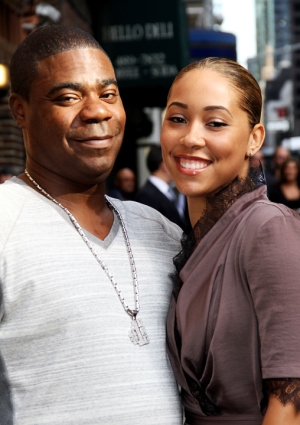 Confused as to why Tracy Morgan won’t help his own mother avoid foreclosure on her home? The 30 Rock comedian insists that he’s estranged from his family, and he won’t be getting into the gritty details publicly.

“I am saddened that these untrue stories about me have people questioning my commitment to my family,” Tracy Morgan said in a statement Thursday.

Divulging little else about what’s behind the Morgan family rift he added, “For reasons that are between us, I have not seen my Mother in 11 years and outside of a random call here and there have had little to no contact with my sister.”

Tracy Morgan, pictured here with future wife Megan Wollover, was accused of being a d*****bag by sister Asia Morgan in an interview published Tuesday.

“My mom’s house isn’t extravagant, but it’s her home, her health is failing. She has diabetes and her legs are giving out on her,” Asia explained. “She has a son that can do and she’s done everything that she could possibly could [sic] for her family.”

She went on to say, “Because of the way he’s treating our mother, all bets are off. He’s never been a nice person. And money’s just made it worse.”

Tracy Morgan, reportedly upset that his family has gone to the press, added in his statement Thursday, “We all have personal family issues that we have to deal with in life, but I choose to deal with mine in private and not through the media.”

Do you think Tracy Morgan is right to refuse help to his estranged family?