Brody Jenner and Avril Lavigne aren’t exactly boyfriend and girlfriend, but they’re not entirely single, either. Find out what friends are saying about their unconventional arrangement. 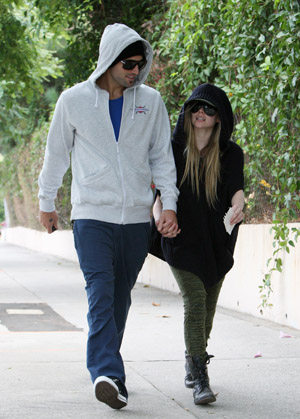 Break up? What break up? Canadian sourpuss Avril Lavigne and Bruce Jenner’s other kid, Brody Jenner, were spotted together in Los Angeles. So, everything is good in their relationship? Not so fast.

“They are not back together,” a source told US Weekly of the low-key couple. However, they’re still friendly and are “figuring out how to separate.”

Sounds like a recipe for “friends with benefits,” don’t you think?

The couple split just after the New Year, despite reports that Jenner proposed to the “Complicated” singer.

“It’s a case of opposites attracting. He’s a cool Malibu surfer type, she’s a pale rocker from Canada. But they work well for each other,” a source said of their purported engagement. However, they actually split.

“It was mutual, but Brody really broke up with her,” a source told US Weekly. He didn’t want to wait around for her while she toured in Europe. “He told her he was tired of always being her plus-one, and always going on tour with her.”

The split comes after the pair was involved in a November bar brawl.

“I don’t fight. I don’t believe in it. To clear things up I got attacked by 5 people last night out of nowhere. Not cool. My face is f**ked,” Lavigne tweeted after the bloody attack. “As in black eye, bloody nose, hair ripped out, scratches, bruises and cuts. So not ok to be abusive to others. Violence is NEVER the answer.”

Apparently, the couple that fights together doesn’t stay together. Who would’ve thought? Still, a source said they could reunite.

“They still love each other and could get back together, but for now, he needed a break.”

Do you think Brody Jenner and Avril Lavigne should get back together?