First Tim Tebow, now Gisele. Despite a world full of poverty and violence, apparently God has nothing better to do on a Sunday than watch football and help out His chosen team. 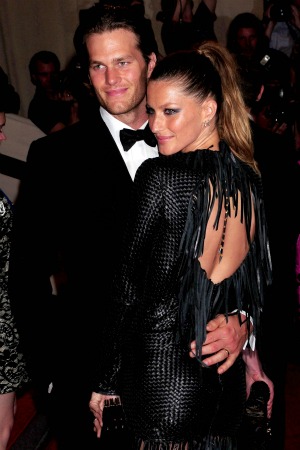 sent a sappy email to friends and family asking them to pray for her husband Tom Brady, quarterback for the New England Patriots, in this weekend’s big game against the Giants. One of those friends supplied the missive to the New York Post.

“My sweet friends and family. This Sunday will be a really important day in my husband’s life. He and his team worked so hard to get to this point and now they need us more than ever to send them positive energy so they can fulfill their dream of winning this super bowl,” Gisele wrote.

“I feel Tommy really needs our prayer, our support and love at this time… So I kindly ask all of you to join me on this positive chain and pray for him, so he can feel confident, healthy and strong. Envision him happy and fulfilled experiencing with his team a victory this Sunday.”

When the Post contacted the supermodel about her prayer plea, she responded, “I am surprised that you received this e-mail; it was a private note only sent to close friends and family.”

Since Brady already has three Super Bowl wins and two Super Bowl MVP awards under his belt, as well as being fabulously wealthy, perhaps God’s attention might be better spent on something like peace in the Middle East or filling the empty tummies of starving babies.

Of course, Gisele isn’t the only one to ask for divine intervention on something as seemingly trivial (in the grand scheme of things) as a football game. In addition to everyone who has money riding on the outcome, avowed Christian and Denver Broncos quarterback Tim Tebow has become more famous for invoking his religion before, during and after games than for his performance on the field.