Katy Perry and Justin Bieber have more in common than you ever imagined. We hear Katy is currently in talks with Paramount Pictures about the possibility of starring in a “documentary-style 3D film.” Paramount, as you may recall, is the same studio that brought the Bieber concert film, Never Say Never, to cinemas last winter. 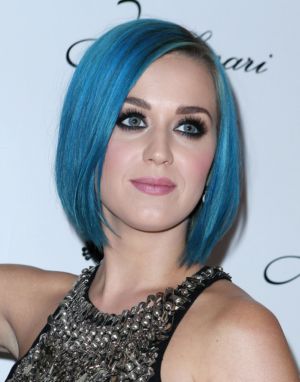 Katy Perry‘s ready for her close-up: At the Grammys and on the silver screen.

The newly blue-haired powerhouse, who reportedly enrolled in acting classes in hopes of landing a feature film role, is settling for the next best thing: A documentary.

Word is the soon-to-be divorcée is in chats with Paramount Pictures and Imagine Entertainment about starring in a documentary-style concert film all about her mega-pop stardom. The 3D feature would come complete with interviews, confessionals with a touring Perry and tons of performance footage of the “Teenage Dream” beauty in action.

Paramount would use a tried and true model to produce the proposed Katy flick, folks-in-the-know tell Billboard magazine. A similar project starring teen singing sensation Justin Bieber was a huge hit for the studio last winter.

Director Jon M. Chu, the lensman behind 2009?s Step Up 3D, documented life on the road for the pint-sized international superstar. The footage was then cut together for a visually-impressive documentary experience that crushed the box office.

Perry would be just the latest subject for a documentary-style concert film.

The House of Mouse followed with the commercially-unsuccessful Jonas Brothers: The 3D Concert Experience the following year. The most recent concert film, Fox’s Glee: The 3D Concert Movie, opened in theaters last August.

Michael Jackson’s This Is It holds the world record for highest-grossing concert documentary. The film was compiled from weeks of footage from rehearsals for the King of Pop’s ill-fated This Is It tour — which had been set to open at London’s O2 Arena just weeks before Jackson’s death.

This Is It took in $261.2 million at the international box office.