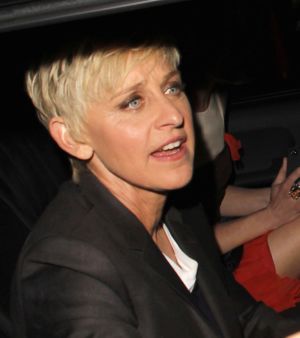 The “activists” are coming after Ellen! A family values group has demanded that clothing chain JCPenney fire Ellen DeGeneres, the brand’s newest celebrity ambassador, for being “openly gay.”

It isn’t the first time she’s worked for the store. Ellen is a former JCPenney employee, having landed her first job there as a teenager in the 1970s.

“One of my first jobs ever was working at the JCPenney in Louisiana in ladies’ apparel. It was the ’70s, so if you were looking for tube tops or flared trousers then I was your girl,” Ellen cracked to her audience last month.

She also promised big changes at the company (more on that later).

“This is a full circle moment, because I am excited to announce my partnership with JCPenney. And most importantly, I’m gonna get my employee discount again. Hello new pillows!”

But not everyone is pleased by the appointment. DeGeneres is now being targeted by controversial interest group One Million Moms.

The group, one faction of the American Family Association, is urging supporters to petition against Ellen being named the new spokesmodel for the chain store and demand that she be replaced by someone a wee bit more “traditional.” One Million Moms made a similar argument when they rallied against TLC’s decision to air the polygamist reality hit Sister Wives in 2011.

The conservative protesters made their case against the beloved TV personality in a open letter featured on their website this week.

“Funny that JCPenney thinks hiring an open homosexual spokesperson will help their business when most of their customers are traditional families,” the statement reads. “DeGeneres is not a true representation of the type of families that shop at their store. The majority of JCPenney shoppers will be offended and choose to no longer shop there.”

The Gay and Lesbian Alliance Against Defamation (GLAAD) has come out fighting in support of DeGeneres.

“Selecting an out performer who has inspired and entertained millions, is not only a smart business practice, but a reflection of how LGBT Americans today are an integral and valued part of the fabric of our culture.”

JCPenney is standing behind its decision to hire Ellen.

“I think Ellen is someone we all trust. She’s lovable, likable, honest and funny, but at her soul, we trust her,” JCPenney CEO and former Apple executive Ron Johnson explains.

JCPenney is revamping its sales strategy. Instead of offering its traditional “door buster” deals and weekly sales, the company is ditching the idea of sales altogether. From now on, JCPenney will always offer the lowest price available on a particular piece of merchandise.

Ashley and Mary-Kate Olsen are among the designers who helped announce the news in New York last month. Other JCPenney design partners, including Cindy Crawford, Martha Stewart and Nanette Lepore, joined the retailer’s executives for the official unveiling of the brand’s new look.

What do you think of JCPenney’s decision to hire Ellen?