Clench it! Christina Aguilera is on the set of The Voice and that means all of her gassy male co-stars need to hold back, according Adam Levine at least. 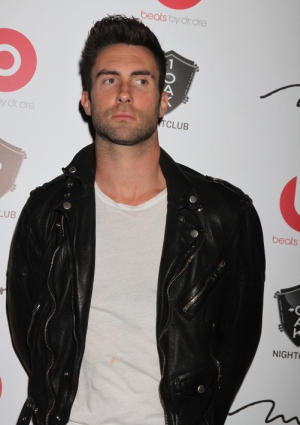 Adam Levine is proving chivalry isn’t completely dead on the set of The Voice. Once Christina Aguilera joined the team it was time for the men to keep their bodily functions to a minimum.

On the subject of mixing farts and females The Voice‘s Adam Levine recently said he tries to be considerate. The Maroon 5 frontman commented, “I honestly just recently started realizing that [she’s] surrounded by three dudes all the time, and that has to be something of a pain in the a**.”

Specifically regarding the guys’ smelly ways, the 32-year-old added in defense, “We stopped farting in front of her!”

Speaking on her own behalf, Christina Aguilera told Rolling Stone, “You have to be a pretty strong girl to stay up in the mix with the guys. It’s a lot. It’s a crazy locker-room kind of situation.”

The pair, along with fellow The Voice mentors Cee Lo Green and Blake Shelton, have become quite the mixed-lot of friends. “Just look at the four of us,” Levine said. “It’s just so wrong and so amazing.”

Specifically of Cee Lo Green, Adam Levine added, “He can wear white socks with sandals and still have it be f***ing cool. If I did that, Blake would make fun of me.”

A round of applause for The Voice guys’ consideration on Christina Aguilera’s behalf?