Aaron Carter has dropped out of his Broadway show in the wake of his sister’s death — and in the wake of rumors she was felled by drugs the former boybander says he wants privacy. 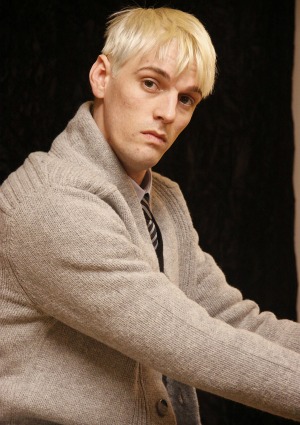 What killed Leslie Carter? The verdict isn’t in yet, but rumors have already started that drugs are the culprit. In the meantime, her brother Aaron Carter has dropped out of his Broadway show The Fantasticks and is asking for privacy while the family figures this out.

“Aaron Carter would like to thank all his fans, friends and especially his cast and crew at The Fantasticks for their outpouring of love and support during this tragic time,” a statement from the performer’s camp read.

Nick Carter: The show must go on >>

“I am with my family spending much needed time together as we deal with this private matter,” he said. “I look forward to returning to my Fantasticks’ Family and performing the role of ‘Matt’ for all my amazing fans. Again, I request privacy for my family and no further statements will be made at this time.”

The Chautauqua County Coroner’s Office is “awaiting a toxicology report to determine a cause of death,” they said. Those results are expected to take approximately four to six weeks.

Sources close to the family told TMZ they don’t need to wait for the results to come back — they know that drugs felled the House of Carters star. The insiders revealed that Leslie was battling an addiction to prescription meds and had moved from her home in Canada to her father’s home in upstate New York to kick her habit.

The family attempted to get rid of all meds like Xanax while she was there and thought it was okay to leave her alone for an hour while they ran errands, the source said. When they came home, they found Leslie unconscious.

Leslie’s one-year-old daughter reportedly was not with her at the time of her death.