Yes, the American Idol auditions are still trudging on with America’s best, and worst, giving it all they’ve got. Next up? Portland, Oregon, where Jennifer Lopez found a common bound with young mother, Britnee Kellogg. 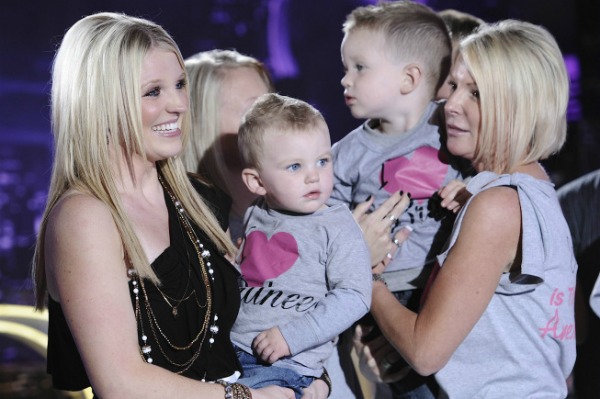 We’re digging deep to find that old affection we had for watching the American Idol hopefuls sing their hearts out for a spot on the show, but something just isn’t right with the auditions this season.

Was Portland littered with talent? Yes. Was Portland a stomping ground for talent with individuality? Eh, yes and no.

One thing Portland, Oregon did have was heart — we’ll give ’em that. Perhaps that’s what we’ve been missing from the American Idol auditions this season — heart.

Young mother of two, Britnee Kellogg (pictured above), who suffered the agony of being with a basketball player who strayed, was definitely a bright star in the cloudy sky of Portland.

After rocking through “You’re No Good,” she bonded with Jennifer Lopez over raising kids while keeping her dreams alive.

We’re not going to lie, we got a little misty-eyed when JLo talked about her own kids, while Brit’s joined her in the room.

It really was a sweet moment filled with “it takes a village” and “make em’ happen (dreams)” moments.

We also have to give a shout out to the emotional journey of Jessica Phillips whose boyfriend fell victim to a stroke.

After waking up he had no idea who she was and now she plays caretaker to D’Angelo. She was chasing a dream of her own in Portland and did her man proud by nabbing a golden ticket to Hollywood.

Did you check out the heartbreaking American Idol auditions in Portland?

Thumbs up or down for Portland?