Mackenzie Foy is set to tackle the big screen in The Twilight Saga: Breaking Dawn — Part 2. But first, she’s taking on the small screen. 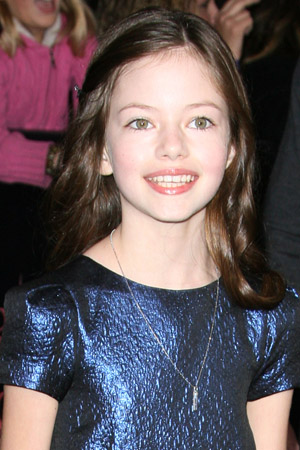 Renesmee Cullen is set to star in the new episode of R.L. Stine’s The Haunting Hour: The Series, airing Feb. 4 at 5 p.m. EST on The Hub. In the episode, Foy’s character finds the doll Lilly D and “her heart may be just what the doll needs to change her evil ways,” according to the show synopsis.

She even took on the more challenging parts of playing Renesmee with ease. “She has to do a hard part as well, because she’s doing — I don’t want to get into special-effects stuff — but she’s playing a baby in some scenes,” he said. “Oh, man, some of the stuff is so strange. I mean, we’ve done very strange things on the Breaking Dawn shoot.”

She’s also a bit of a businesswoman, according to RPatz.

“She’s got a lot of money out of us swearing around her,” he joked in 2011. “I do it by accident, and especially Kristen [Stewart] does it by accident, because she’ll apologize with a swear [word]. She’s like, ‘Oh s**t! Ugh!’ She can’t stop doing it for about 15 minutes, and [Mackenzie] just waits there [with her hand out].”

She’s got a bright future ahead of her with that sort of hustler attitude!