Penélope Cruz is just saying no to fur. The gorgeous actress has joined forces with PETA for their latest anti-fur billboard. Wanna see? 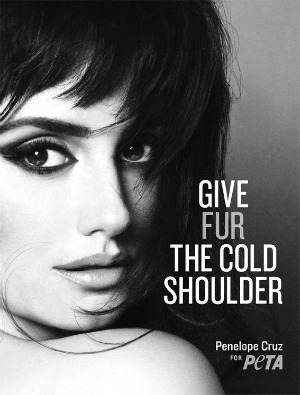 We’re used to seeing Penélope Cruz in an array of gorgeous gowns on the red carpet, but the stunning actress is stripping down for a new PETA ad.

Cruz appears in an implied-topless black and white photo that has been turned into a 70-foot-tall billboard overlooking the Garment District in New York, just in time for Fashion Week.

Olivia Munn strips down for PETA >>

“Penélope Cruz has appeared on every ‘best-dressed’ list in the world, and the one thing you’ll never see her wearing is fur,” says PETA Senior Vice President Lisa Lange. “PETA couldn’t ask for a more fitting emblem of the modern, glamorous woman who knows that there’s nothing more beautiful than a woman who has a look that kills without anyone having to die for it.”

“Penélope’s passion for cruelty-free fashion goes beyond the red carpet because she knows that fur is never glamorous — not as a coat, a collar, or even tiny trim,” read a statement from the animal rights organization. “In fact, there’s not an inch of fur in the collection that she and her sister designed for the fur-free Spanish clothing retailer Mango.”

“Penélope will always take a pass on fur because of the extreme cruelty that fur production causes millions of animals around the world. Eighty-five percent of the fur industry’s skins come from animals raised on fur factory farms, where they spend their entire lives confined to cramped, filthy wire cages, only to be killed by the cheapest methods available, including suffocation, electrocution, gassing and poisoning,” according to PETA.

Penélope Cruz is a notorious animal lover who often rescues strays off the street and brings them into her home. Back in 2006 she told The Age she had “two cats and one dog, and then I have my other dog with me in LA.”

Cruz’s billboard will remain in New York through the end of February.