Nick Carter isn’t leaving a lot of time to grieve over his sister’s death — he’s going back on tour already this week to honor Leslie Carter’s memory. 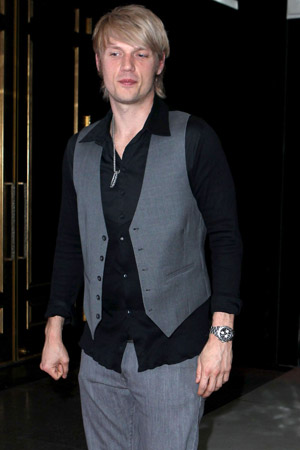 Nick Carter is devastated over the loss of his younger sister, Leslie. However, the Backstreet Boys singer is planning to continue his current solo tour.

“Performing is cathartic to me and I am dedicating the rest of my tour to my sister since she loved to watch me perform,” the singer said in a statement.

He’s scheduled to take the stage on Thursday night at Irving Plaza in New York City.

“We are deeply saddened for the loss of our beloved sister, daughter and granddaughter, Leslie Carter. We request the utmost privacy during this difficult time,” the Carter family said. Leslie, 25, was found at her home in upstate New York. She leaves behind a husband and nearly 10-month-old daughter.

“Our family is grieving right now and it’s a private matter.” The investigation into her death is ongoing at the Chautauqua County Medical Examiner’s Office in upstate New York.

“There were no visible signs of trauma,” coroner Richard Mackowiak told E! News. “We are awaiting a toxicology report to determine a cause of death.”

While Nick might be going on with the show, Aaron Carter is taking a break from performing in the off-Broadway show The Fantasticks.

“His Fantasticks family loves him and offers him support and prayers during this difficult time,” John Capo, the spokesperson for the production, told E! News. “Aaron’s understudy and friend, Matt Leisy, will be covering Aaron’s role until his return. We thank everyone for the outpouring of concern for Aaron.”

No word on how long he’ll be absent from the show, but he is already working to preserve her memory on Facebook.

“Hey this is Aaron we are going to keep her Facebook up..! I will add ppl (people) so we keep leslie alive! We love les,” Aaron, 24, wrote on her Facebook page Wednesday afternoon.

Do you think Nick Carter is going back to work too soon?