Does Snooki have a meatball in the oven? A report says the star of The Jersey Shore is pregnant. Will we see a mini-guidette soon? 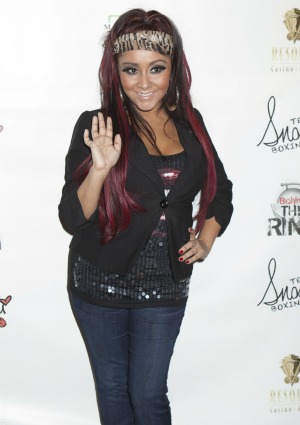 Snooki is pregnant — at least, according to new rumors. A source close to the reality star said she and her boyfriend of one year, Jionni LaValle, are expecting a child together.

“She is pregnant and has only told her closest friends and some family,” an insider told Star magazine.

“She’s been telling people that she has a big announcement coming.”

Snooki sent several messages to fans on social media hinting that a baby could be on the way, including a Facebook post saying “I feel sick,” then later tweeting “Late night craving… yogurt hits the fricken spot!”

However, that rumor could be a baby of a different kind. We also hear Snooki may be birthing her very own spinoff of The Jersey Shore with JWOWW — a project that has hit a bump in the road after Hoboken mayor Dawn Zimmer refused to let them film in her town “based on the negative impact it would have on the health, safety and welfare of our community.”

Zimmer called the production “an attractive nuisance causing crowds to assemble at every hour of the day and night, additional traffic congestion, the attendant noise associated with large public gatherings and unacceptable lessening of the quality of life for the local residents and businesses.”

So what do you think, is Snooki’s baby for real or is she just talking about her so-far thwarted spinoff show? The star herself is denying the rumors. When asked about it on the Opie and Anthony Sirius radio show, she firmly replied “No!”

It’s probably for the best. They don’t make spray tan for babies.