Demi Moore has reportedly refused to enter a treatment facility, despite her rumored battle against substance abuse and anorexia. 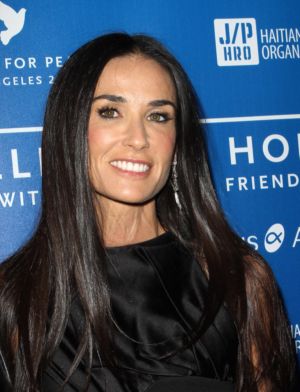 They tried to make her go to rehab, she said… well… you know the rest.

Demi Moore is depending on good vibes and the comfort of familiar surroundings to help her battle a rumored eating disorder and an alleged addiction to Adderall.

Word on the curb has it that the Ghost actress has refused to enter a treatment facility , despite being hospitalized last month for a seizure allegedly caused by huffing nitrous oxide — commonly called a “Whip-It” — and smoking an herb. Demi, 49, is also reportedly battling anorexia.

The aging screen star has been urged to seek professional help for her troubles, but she’s reluctant to enter a facility.

“Ego-wise, this is the worst thing that could happen to Demi, because she’s such a private person,” a source close to the actress’ circle told People magazine. “She’s embarrassed.”

Demi’s three daughters — Scout, 20, Tallulah, 16, and 23-year-old Rumer — are all said to be in favor of their mother checking into rehab. Rumer and Tallulah are presently living with their father, action star Bruce Willis. Scout is enrolled at Brown University in Providence, Rhode Island.

“Demi needs help, but she’s not ready to get it,” a tipster told Hollywood Life. “She doesn’t want to check into rehab even though her daughters want her to, especially Rumer, who was at home and witnessed her convulsing, Demi thinks her problems are emotional and that she doesn’t need rehab.”

Demi was taken to a Sherman Oaks hospital Jan. 23, after falling ill during a birthday party at her home in suburban Los Angeles.

Her reps continue to insist that she is under a doctor’s care “for exhaustion and to improve her overall health” in the wake of her split from alleged philanderer Ashton Kutcher last year. The 911 call that precipitated Moore’s trip to the hospital, however, seems to point to something a wee bit more serious than mere stress from a pending divorce.

Sources at the energy drink manufacturer Red Bull told TMZ that Demi has allegedly been receiving large quantities of the popular drink as far back as 2002. Moore was so hooked on the canned beverage that the company used her to market the product while ensuring that the actress was never without it.

Adderall is a legal amphetamine used to treat attention deficit hyperactivity disorder (ADHD) and narcolepsy. The drug is often prescribed to curb hyperactivity in children with ADHD, but it sometimes ends up in the hands of moms, who use it as an appetite suppressant.

According to the rumor mill, Demi was taking Adderall while drinking Red Bull as a substitute for food in the months leading up to her collapse.

Moore, a subscriber to the Jewish mysticism faith of Kabbalah, has been undergoing “spiritual counseling” since being released from the hospital.

The star is currently staying at an undisclosed location as she recovers from her ordeal.