For those of us who live in the northern latitudes, February can be cold and dreary. Beat the winter blues by letting yourself be transported to warmer climates via this month’s audio book selections. You’ll find family sagas, a bit of romance, a coming-of-age story and a Memphis mystery.

A Grown-Up Kind of Pretty: A Novel 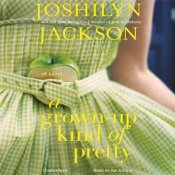 Liza Slocumb has reason to be worried now that her daughter, Mosey, has turned 15. At that age both she and her mother, Jenny, found themselves unwed and pregnant. Thus the two older women watch the teen like a hawk, hoping to break the cycle of single parenthood. As summer begins, the family bonds are stretched to their limits, first when Liza suffers a stroke and second when workmen unearth a small box containing the bones of a baby from beneath a tree in the Slocumbs’ backyard. Liza might be able to explain the burial, but the stroke has impaired her ability to communicate. Meanwhile, Mosey seems determine to solve the mystery herself. A Grown-Up Kind of Pretty is a complex tale of the meaning of family and the unbreakable bonds of love. Author Joshilyn Jackson does a stellar job narrating the audio edition of her novel. Her easy Southern accent helps listeners lose themselves in the Slocumbs’ southern Mississippi household. 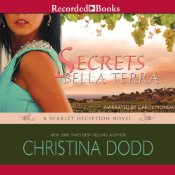 The Bella Terra Vineyard and Resort has been in the Di Luca family for generations and is now run by Sarah Di Luca and her three grandsons. While Eli and Noah take care of the day-to-day business, Rafe has been in the city building up his security business. When Sarah is viciously attacked, Rafe returns to the vineyard to help his brothers track down whoever did the deed. Secrets of Bella Terra is an exciting mystery with a warming dose of romance as Rafe is reunited with his childhood sweetheart, Brooke, who now works for the Di Lucas. Christina Dodd, an award-winning romance writer, turns to sunny California as the setting for her new Scarlet Deception series. Narrator Carol Monda’s throaty voice and expressive reading keep listeners engaged in the Di Luca family affairs. 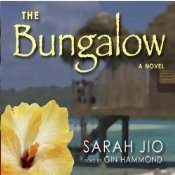 When wealthy Anne Calloway graduated college, her family expected her to settle down and marry Gerard Godfrey, a young man of her social class. But it’s 1942 and the world is at war. Anne, spurred on by a friend, makes a gutsy decision and volunteers for the Army Nurse Corps and is sent to Bora Bora. There, surrounded by blue waters and tropical breezes, she meets Westry, the love of her life, with whom she shares her hopes and dreams. After the couple is torn apart by a tragedy and the course of the war, Anne returns to her family. Almost 70 years later, the elderly Anne receives a letter that prompts a rush of memories, allowing her to explore the past and reveal the passion she’s carried all her life. The Bungalow is novel of a love, loss, and family duty. Sarah Jio’s exquisite prose is the perfect foil for a cold winter’s night. Narrator Gin Hammond’s broad range of tones and pitches gives each character a distinct and age-appropriate voice.

A Little Death in Dixie 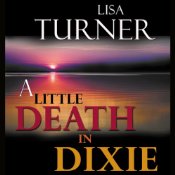 Detective Billy Able has lived in Memphis long enough to know its ways. But when one of his old flings — a socialite with a reputation — goes missing, he wasn’t prepared for what he’d soon uncover about the people he thought he knew. Teaming up Mercy Snow, the sister of the victim, Able is soon embroiled in multiple cases that take him into the dark corners where people try to hide their secrets. Lisa Turner’s A Little Death in Dixie is a well-crafted, multilayered mystery that teases us along with a full list of slimy suspects and shocking revelations as Able and Snow race to discover the fate of the missing woman. Narrator Jeffrey Kafer’s pacing and intonations increase the suspense, carrying listeners along the twisting path of Able’s latest case in the city of music.

Looking for Salvation at the Dairy Queen 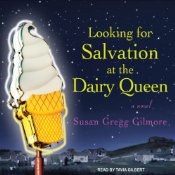 Catherine Grace Cline, daughter of the Baptist preacher, knows she is meant for bigger things than just hanging around the parking lot of the Dairy Queen in the one-light town of Ringgold. Thus when she gets a chance to move to Atlanta, she heads on down the road trying not to think about the family and boy she left behind. Unfortunately, before Catherine can settle into her exciting new life, she is forced to return home. Looking for Salvation at the Dairy Queen chronicles Catherine’s life from a young dreamer to a determined young woman who realizes the importance of family and friends and learns the power of forgiveness. Susan Gregg Gilmore perfectly captures small-town life in 1970s Georgia. Narrator Tavia Gilbert gives Catherine just the right tone of sassy enthusiasm, embellished with a touch of warm Southern twang.