The LGBTQ community isn’t the only faction of American society that has a bone to pick with Emmy-nominated 30 Rocker Tracy Morgan. Apparently, his family doesn’t like him very much, either. 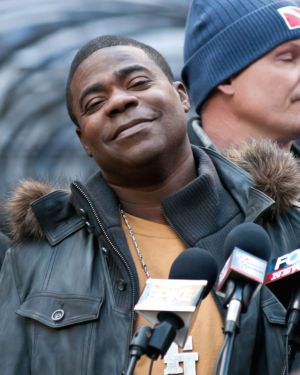 Actor/comedian Tracy Morgan — a multimillionaire — is accused of failing to rescue his cash-strapped mother from the financial turmoil that could leave her homeless before the end of the month.

Some members of Morgan’s family are upset that the Saturday Night Live alum, who’s worth a reported $18 million, refuses to pony up the $25,000 need to help his mother avoid foreclosure on her Ohio home, The New York Daily News said Tuesday.

Morgan has been estranged from his mother, Alicia Warden, for over a decade. The pair had a troubled relationship dating back to Morgan’s troubled childhood in Brooklyn’s gritty Bedford-Stuyvesant community.

Tracy lamented over his tumultuous relationship with Warden in his 2009 memoir, I am the New Black. Now the star is using the lifetime of bad blood to justify holding fast to his purse strings, insiders say.

Morgan, 43,  has allegedly offered Warden just $2,000 to help her stave off hungry bankers, prompting family members to speak out against him. Asia Morgan, Tracy’s 41-year-old sister, just doesn’t see why her famous sibling can’t lend his mother the entire amount in default.

After all, $25,000 would merely be “a drop in the bucket for Tracy,” she says. Asia called Tracy a d*****bag and says she’s done keeping quiet about his alleged ill treatment of his kin.

“Because of the way he’s treating our mother, all bets are off,” Asia fumes. “He’s never been a nice person. And money’s just made it worse.”

Warden, 61, says her mortgage company has notified her that if she doesn’t make a minimum payment by Feb. 23, it will begin foreclosing on her home. It’s just the beginning of her money woes.

Her utilities are about to be turned off . She’s also been threatened with repossession after falling behind in her car payments.

Warden says she worked until she was laid off in February 2011. Not long after that, she approached Tracy about helping her financially. He initially agreed to pay off the house, but changed his mind after accusing her of giving an interview to the media.

She denies doing any such thing.

“My mom’s house isn’t extravagant, but it’s her home, Her health is failing. She has diabetes and her legs are giving out on her,” Asia says. “She has a son that can do and she’s done everything that she could possibly could [sic] for her family.”

When Warden’s unemployment benefits ran out earlier this month, she again asked her son for help.

After explaining what she owed, she says a female employee of Morgan’s called and presented her with the $2,000 offer.

“Tracy’s offering you a one-shot deal. I told her, ‘Thank you, but no thank you. I’m not some person in the street.’ That was the straw that broke the camel’s back.”

Asia chimes in, “My mother did everything she could. She ran numbers, but she did it to put food on the table. We were raised in the [Tompkins] projects [in Bed-Stuy, Brooklyn], but we didn’t think we were poor.”

Morgan was briefly hospitalized for “exhaustion” after accepting an award at last month’s Sundance Film Festival in Utah. The incident prompted allegations that the sober alcoholic has again fallen off the wagon.