If a movie were to be made of Newt Gingrich’s life, who would play the lead role? The presidential candidate has an answer for that! 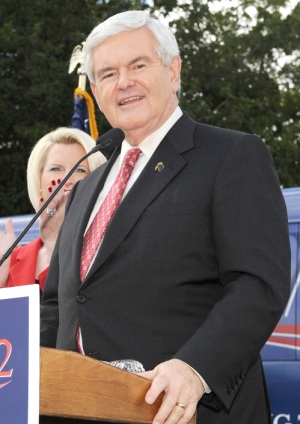 Newt Gingrich has his eye set on the Oval Office. Regardless of whether or not he gets there, the candidate for the 2012 Republican Party presidential nomination knows who should play the movie version of himself: Brad Pitt.

What? You don’t think Newt Gingrich and Brad Pitt look much alike? Don’t worry, neither does Gingrich — and he doesn’t much care about that particularity.

Brad Pitt can’t hold out on getting married anymore >>

The 68-year-old politician wasn’t afraid to dream big when asked who should be hired on to fill his shoes. Newt Gingrich phoned into the Rich Stevens Radio Show on Tuesday and was asked, “If Hollywood was going to do a movie about your life, who would you like to see play the lead role?”

Gingrich replied, “Oh, in my fantasy life? Brad Pitt… why not?!”

Host Rich Stevens quipped in reply, “Is it because you guys look alike?”

Rainn Wilson: Yes, I look like a young Newt Gingrich >>

Undeterred by the seemingly back-handed question the seasoned debater replied, “No, I don’t look like him at all. He’s thinner, he’s better looking, he’s younger. But you asked me if I had anyone who could play me in a movie… why not go for Brad Pitt?”

Can’t blame a guy for dreaming! Now if only Hollywood would come knocking…

SheKnows has reached out to Brad Pitt’s rep for comment on Newt Gingrich’s suggestion, but we have yet to hear back. Odds are slim they’ll ever ink a deal, as the actor’s Democratic allegiance has been known publicly for nearly a decade, beginning with his support of John Kerry during the 2004 presidential race.

If Newt Gingrich gets to pick Brad Pitt to play him in a movie, whom would you choose to play yourself?