What is Paula Abdul planning to do next? She isn’t saying, but Simon Cowell says we’ll be seeing them together again in the near future. 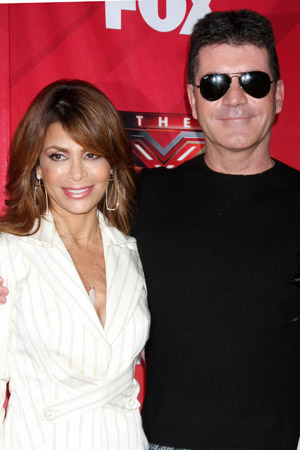 Paula Abdul finally admitted what we all assumed after Nicole Scherzinger and Steve Jones were fired from The X Factor: She was let go, too.

“Yes, it’s true; I won’t be returning to The X Factor next season,” Abdul tweeted Tuesday afternoon. “I’ve learned through my longevity in this industry that business decisions often times override personal considerations. Simon & I, along with Fox & Fremantle, have been communicating about this for a while now, & I have absolute understanding of the situation.”

Insiders are whispering that Cowell blamed Abdul for the show’s lagging ratings.

“[Simon] felt that Paula was replaceable because her groups didn’t succeed and [he] didn’t want the Idol comparisons to continue,” a source told Hollywood Life.

Is that the reason? We’ll probably never know the whole story, but both sides are adamant it’s just about business and they’ll still be friends.

“Simon is, and will remain a dear friend of mine,” she added on Twitter. “I want nothing more than for The X Factor to exceed ALL of their wildest dreams. This truly has been a blessing and I am most grateful.”

“You do develop friendships with the people you work with and Paula, in particular, is a very close friend and I expect to be working with her on another project in the near future,” he said in a statement.

Could that new “project” be a relationship? The two have flirted for years, though Cowell admitted he thought about sleeping with Abdul at one time.

“But then I thought, I don’t think the after would be as good as the before. I’d let her stay for a few hours, but then it would have to be goodnight,” he told Barbara Walters.

Ew. So, no relationship — what will they do together? Let’s just hope it’s not another talent show. We have enough of those.