It wasn’t very polite of the CW to take a week off from The Vampire Diaries, was it? Especially since they dropped some killer info in the last two minutes of the last episode — Elijah’s back! 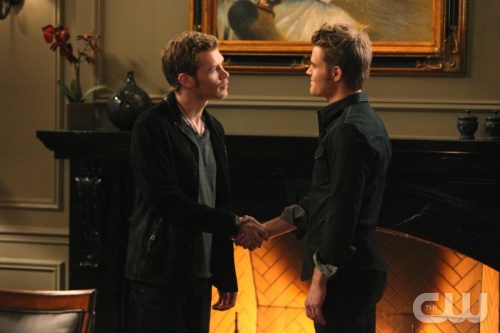 Dinner parties in Mystic Falls bite — actually, some of the guests do too!

When Klaus decides to hold a bizarre dinner party on The Vampire Diaries’ new episode, “Bringing Out The Dead,” a few more secrets are revealed about the Originals’ past.

Elsewhere, Stefan and Damon go to separate allies in the quest to kill Klaus and Caroline is unable to stop a tragedy.

Check out a preview of “Bringing Out The Dead” and catch the full episode tonight (Feb. 2)…

The CW officially boasts “Bringing Out The Dead” as the following: “Sheriff Forbes (Marguerite MacIntyre) delivers some disturbing news to Alaric (Matt Davis) and Elena (Nina Dobrev) about the weapon used in a recent murder. In the Salvatore brothers’ escalating quest to kill Klaus (Joseph Morgan), Stefan (Paul Wesley) turns to Bonnie (Kat Graham) and Abby (guest star Persia White), while Damon (Ian Somerhalder) reaches out to an old acquaintance for help in setting up an elaborate plan. Intent on a plan of his own, Klaus hosts a strange dinner party, where he reveals another story from his family’s violent past until an unexpected guest brings the party to an end. Meanwhile, Caroline (Candice Accola) is heartbroken when she is unable to stop a tragedy from unfolding.”

You’ll notice Elijah isn’t in the synopsis, so we can’t help but wonder if he’ll be part of the big dinner party coming to an end or if he’ll just sit quietly on the sidelines?

Elijah’s gorgeous vampire face was only featured for a moment in the last new episode — they wouldn’t leave us hanging with only a taste tonight, would they?

One thing we do know is The Vampire Diaries never fails when it comes to explosive parties.

Sound off in the comments section about this season of The Vampire Diaries!

Is TVD taking a bite out of your Thursday?