HBO is betting big on Luck. The freshman drama, which premiered last Sunday, has already scored a second season! That means Dustin Hoffman and his gambling gang will be back for another round. 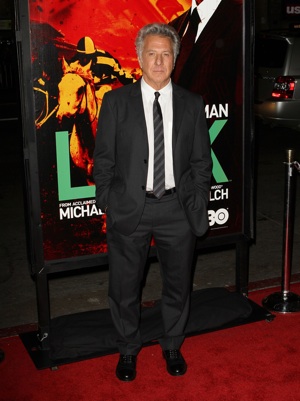 HBO has a lot of faith in their newest drama. After airing one episode, the network has renewed Luck for a second season. The series, which is led by Oscar-winner Dustin Hoffman, centers on the corrupt world of gambling and horse racing.

Luck premiered on Sunday night to a total of 3.3 million viewers (including repeats), which was just enough to please the network bosses.

Luck has some of Hollywood’s brightest talent behind and in front of the camera. The series is produced by Michael Mann (Heat, The Insider), who also directed the pilo,t and David Milch, the brainchild behind Deadwood and NYPD Blue.

According to Michael Lombardo, the head of HBO programming, the network is ecstatic about the show’s future. “We couldn’t be more thrilled with the critical response to this beautiful piece of work,” he said. “We are very excited about where David and Michael plan to take these incredible characters.”

HBO is dedicated to making the show a success. They even bankrolled a $50,000 contest to get viewers to tune in.

So is Luck really worth it? TVFanatic called the show “slow moving,” which is ironic since it’s about racing. But they also warn that its pace can be deceiving.

“Milch drops us into the story with absolutely no context, which makes for a steep learning curve. Don’t know what a Pick 6 is or what some of the racing terms mean? Too bad, because Luck expects you to learn on the fly.”

Luck sounds pretty complex, which is right up HBO’s alley.

The second season will consist of 10 episodes and is slated to debut Jan. 2013.