Shakira is now royalty in France! Well, sorta: The singer was honored with a knighthood during a Saturday ceremony in Cannes. 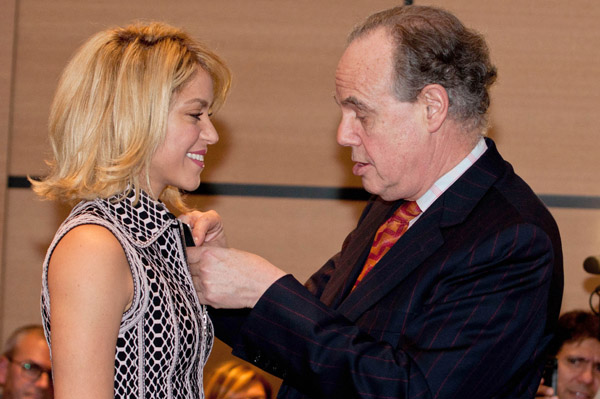 France loves Shakira! The French government honored the Colombian hip shaker with a Knight of the Order of the Arts and Letters award on Jan. 28 in Cannes. France’s Minister of Culture and Communication, Frédéric Mitterrand, did the honors — but he got a little handsy during the pinning ceremony.

Shakira bounced back quickly from the unwelcome grabs, though.

“I am so humbled to receive this honor in a country like France that has shared an important cultural legacy with the rest of the world,” the “Hips Don’t Lie” singer said in her acceptance speech.

The Barranquilla-born babe isn’t resting on her newfound “power.” She is back to work on new music, teaming with Black Eyed Peas frontman Will.i.am for his upcoming release, #willpower.

“I have a song with Alicia Keys — me, Alicia and Swedish House Mafia. Me and Shakira have been trying to finish the stuff we started, and me and Britney is really crazy,” he told Capital FM. “So we got a song with me, LMFAO and Eva Simons. A song with me and Busta Rhymes and Swizz Beatz. I got a whole other bunch of collaborations.”

That’s Shakira for you: Getting knighted one night, collaborating with a hip hop artist the next. Her love of all music comes from her diverse DNA.

“I am a fusion. That’s my persona,” she told Time in 2010. “I’m a fusion between black and white, between pop and rock, between cultures — between my Lebanese father and my mother’s Spanish blood, the Colombian folklore and Arab dance I love and American music.”