Adele is officially signed on to perform at the 2012 Grammy Awards! The singer shared the happy news herself via Twitter on Tuesday. 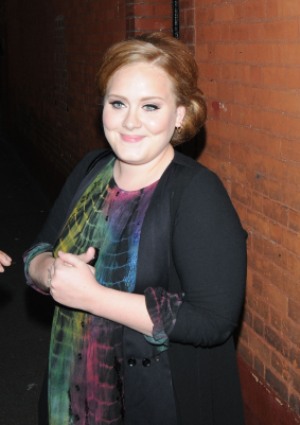 Ready your ears to hear the sweet sound of Adele‘s voice for the first time live in months! The singer, who was silenced by vocal chord surgery and mandatory rest last fall, is set to make her comeback performance on the Grammy stage.

“I’m immensely proud to have been asked to perform at this year’s Grammy Awards,” Adele, nominated for six awards in major categories, said in a statement. “It’s an absolute honor to be included in such a night and for it to be my first performance in months is very exciting and of course nerve-racking [sic], but what a way to get back into it all.”

“Ima be, Ima be singing at the Grammys,” Adele tweeted Tuesday. “It’s been so long I started to forget I was a singer! I can’t wait.”

Adele, whose romance woes have spawned hits such as “Someone Like You” is currently dating former financier Simon Konecki — though she’s reluctant to speak much about their relationship. In mid-January she wrote briefly of their love on her personal blog in an effort to put rumors that he is a married man to rest.

In reaction to learning of her six Grammy nominations, Adele blogged previously, “This has been the best year as it is, but to end 2011 with this incredible achievement and honour is beyond anything I can express. Thank you to every single person who has taken a shining to this record, for making it have such an impact, this record has taken on a life of its own thanks to you. I made the record and you’ve made it what’s its become.”

Mark your calendars for Feb. 12 to watch Adele perform live at the Grammys!