Spoiler Alert! NFL Magazine has gotten its pigskin-lovin’ paws on a hot scoop about Madonna’s headlining halftime show at Sunday’s Super Bowl. Which of your Material Girl faves are on the set list? 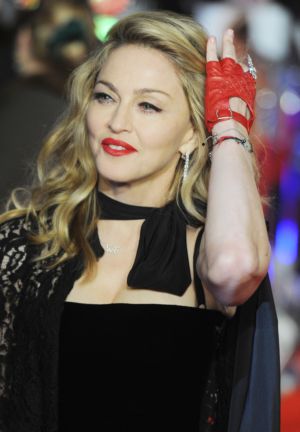 It looks like the Material Girl still has a few moles in her camp. Despite feverish attempts to remain completely tight-lipped about what goodies she has in store for Sunday’s Super Bowl Halftime Show, Madonna snoopsters have reportedly dished the deets about her planned performance to NFL Magazine.

Super Bowl gawkers can expect lively renditions of some Material Girl classics, if the scoop making the rounds on the blogosphere is to be believed. The pigskin-influenced publication dropped some nuggets about Madge’s set in a sing-song posting on the magazine’s website Monday.

“Though Madonna’s set list was not officially announced at press time, fans might expect her to give all her luvvin’, provide a ray of light and be in vogue with her music,” the magazine reads. “The Super Bowl is almost a national holiday, after all.”

Elton John to Madonna: Make sure you lip-sync good >>

British singer-songwriter M.I.A. and Queens-bred femcee Nicki Minaj have confirmed that they’ll be on hand at Lucas Oil Field in Indianapolis this Sunday to perform “Gimme All Your Lovin'” alongside Miss. M. The up tempo dance track is the lead single from Madonna’s forthcoming 12th studio album, M.D.N.A., dropping in March.

“I’ve never been to the Super Bowl, so it’s my first time,” M.I.A. told BBC Radio on Monday.

“I’m going to be performing with Madonna and Nicki Minaj. If you’re gonna go to the Super Bowl, you might as well go there with America’s biggest female icons.”

“Gimme All Your Lovin'” debuts on iTunes this Friday.

Perhaps that explains the “brutal” rehearsals she’s been holding ahead of the big show.

“Madonna has been brutal in rehearsals. Although they’ve been having a laugh, they’ve been doing up to 12 hours in a New York studio,” one informant tells The Sun.

“She’s saying they can sleep after the Super Bowl. She’s involved in every aspect of the show, including Nicki and M.I.A.’s outfits. Nicki has been telling pals it’s the most grueling thing she has ever done and wouldn’t expect anything else, calling it an ‘epic learning experience.'”

Madonna called the experience “nerve-wracking” in an interview with The Tonight Show’s Jay Leno this week.

“I have 12 minutes to put on the greatest show on earth. Okay, that’s a lot of pressure.”

Luckily, Madge will have reinforcements: The Voice’s Cee Lo Green is expected to join Madonna on stage. LMFAO, who will appear at other Super Bowl XLVI-related events around town, is also rumored to be involved in the halftime performance.

The New England Patriots take on the New York Giants in a rematch of Super Bowl XLVII, airing live on NBC Sunday, Feb. 5 at 6:30 p.m. ET.