Steve Jones and Nicole Scherzinger have been axed from the cast of The X Factor. Fox says the Welsh host and the Pussycat Doll-turned-indecisive talent show pundit will not be back when the singing competition returns for a second season this fall. Good idea? 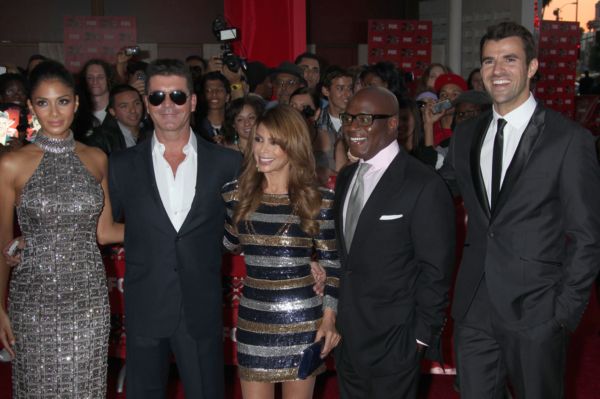 Steve Jones — the Welsh television personality once called “as charmless as a Ken doll and even less animated” — will not be back to host a second season of the Fox talent show The X Factor.

Also leaving the series is Nicole Scherzinger, the former Pussycat Dolls frontwoman who found herself at the center of death threats after her failure to deliver a crucial vote sent fan favorite Rachel Crow, 13, packing three weeks before the finale.

The cast brouhaha comes just a month after Fox and Jones vehemently denied whispers that anyone would be leaving the show.

Jones was originally slated to host X Factor alongside Scherzinger, who replaced British pop star Cheryl Cole as a judge when executive producer Simon Cowell and other showrunners developed second thoughts about having the British pop tart join the series.

On Monday, Jones and the network released statements confirming that the U.K.’s answer to Ryan Seacrest will not be on the other end of the microphone when Simon Cowell’s hit talent show returns to the tube in September.

“I wont be hosting next season’s X Factor, which is a shame, but I cant complain as I’ve had a great time. Good luck to everyone on the show, ” Jones tweeted Monday evening.

“There have been mistakes and he just doesn’t seem to have the knack for dealing with contestants,” a tabloid tattle told The Chicago Sun-Times last month.

Steve has blamed his seemingly “rude” hosting manner — which saw him fail to comfort Crow when she collapsed to the floor in tears upon elimination — on “screaming” producers.

Nicole proved herself an indecisive judge when she waffled on a vote and Crow ended up going home. When asked at a press conference last month whether she’d return for a second season of The X Factor, the Pussycat Dolls singer refused to give a straight answer.

“I’ve had a lot of fun this season,” she said. “The reason I took this job is I wanted to mentor, first and foremost… It has been very hard on me, the elimination process. It’s something I could never have been prepared for.”

The “Don’t Cha” songstress now plans “to focus on her music career,” informants say. Ex-Destiny’s Child girl bander Kelly Rowland, a judge on the British adaptation of The X Factor, is reportedly being courted as a possible replacement.

Cowell, Paula Abdul and former record executive L.A. Reid make up the remainder of the judges panel. But that could soon change.

Paula is expected to announce her departure from The X Factor sometime in the coming days, if tipsters for trade industry website Deadline Hollywood are to be believed.

No reason has been given for the cast shakeup. But despite consistent viewership, X Factor has failed to achieve popularity similar to American Idol — the long-running singing smash Cowell left to import X Factor Stateside.

“None of the three left on their own accord and that it was cleaning house day at the so-so rated reality series,” Deadline wrote on Monday.

The X Factor currently averages about 12.4 million viewers a week, compared with the 21 million pairs of peepers per episode that typically tune in for Idol.