The Help‘s Octavia Spencer won big at the SAG Awards last night — but all anyone wanted to talk about was her weight. What did the actress have to say? 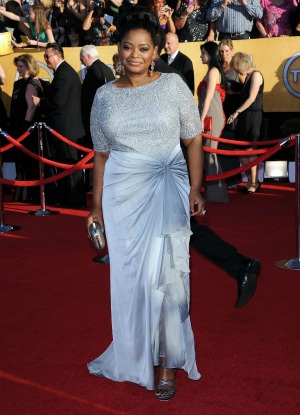 Octavia Spencer had a big night at the SAG Awards — but she is particularly concerned about the big number she sees on the scale.

“I am not healthy at this weight,” Spencer, 39, said backstage after accepting her award for best supporting actress.

“Any time you have too much around the middle, then there is a problem. [And] when you reach a certain weight, you are less valuable,” Spencer explained, revealing a sad fact of Hollywood life.

“It’s our society. I feel for the overly thin women as much as I do for the overweight women. It… has to change.”

“If more women ate, they would be a lot happier,” she said. “Let me tell you, I am a lot grumpier when I don’t eat.”

Spencer added that she is currently working with a trainer and hopes to drop at least 15 pounds so she “can be healthy and look good for me.”

“I’m just gonna lift this baby a few times to lose that little bit of weight I need to,” she joked.

But the actress isn’t letting this weighty issue slow her down. After winning at both the Golden Globes and the SAG Awards, she is quickly on her way to Oscar gold.