The Muppets didn’t react too kindly when a news network questioned the politics of their recent film. Find out what Kermit the Frog and Miss Piggy really think of Fox News. 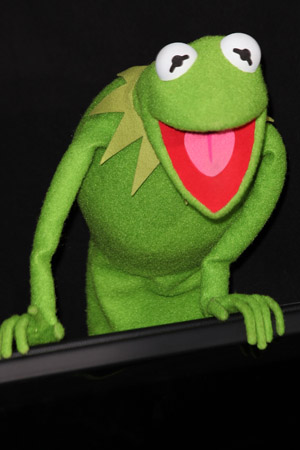 We know it’s a stretch, but Fox News pundits were beside themselves a couple of months ago when the new Muppet film starring Amy Adams and Jason Segel hit theaters. Why? The network claimed the movie brainwashes young children against capitalism since the film’s villain is an oil company bigwig.

“The Muppets are back and being terrorized by an evil oil executive in their new movie,” Fox Business News anchor Eric Bolling said. “Liberal Hollywood depicting a successful businessman as ‘evil,’ that’s not new.”

“I’ll put it out there: Is liberal Hollywood using class warfare to kind of brainwash our kids?”

Seriously — because what 6-year-old wouldn’t understand the symbolism of an oil tycoon in film produced by the extreme left in Hollywood? We kid.

Hollywood wants you to elect a puppet president >>

Kermit the Frog and Miss Piggy don’t understand the logic either — and they spoke out against Fox News during a promotional appearance in London. A reporter asked Kermit about Fox News‘ take and the frog had quite the opinion.

“It’s a funny thing, they were concerned about us having some prejudice against oil companies, and I can tell you that’s categorically not true,” he told reporters. “And besides, if we have problems with oil companies, why would we have spent the entire film driving around a gas-guzzling Rolls-Royce?”

“It’s almost as laughable as accusing Fox News of being, uh, you know, being news,” Miss Piggy added. Zing!

“That’s going to be all over the Internet,” Kermit added.

Fox News hasn’t publicly responded to the criticism, though we’re sure they’ll spin it into another threat to capitalism.