Elizabeth Olsen has worked hard to establish her name outside the fame of sisters Mary-Kate and Ashley, yet when trouble comes knocking she’s happy to turn to their friendly faces. 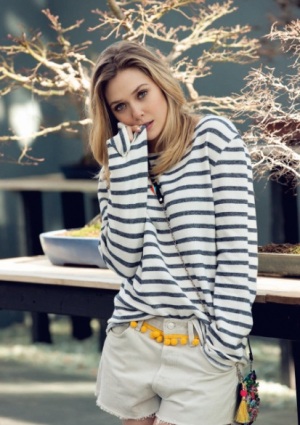 Elizabeth Olsen is on the March cover of ASOS Magazine, sharing what life was like growing up as the younger sister of ultra-famous twin stars Mary-Kate and Ashley Olsen. Aside from a few “abnormal moments,” the young actress insists she had a charmed childhood.

“A lot of casting directors didn’t make the connection at first,” Elizabeth Olsen told ASOS of breaking into the business without riding on the fame of her sisters. “I loved it when that would happen, because there was no baggage of any kind, whether it was good or bad… I’ve always wanted to feel like everything I did, I worked hard for, because I had a complex about it.”

Elizabeth Olsen, now age 22, is the baby of the family which includes 25-year-old twin sisters Mary-Kate and Ashley, and an older brother named Trent. Despite the twins’ extreme fame and subsequent riches, the kids were raised in a relatively normal fashion.

“I did lead a very charmed life growing up, but I was aware of the things that were abnormal,” explained Elizabeth Olsen. “The only time I flew first-class as a kid was when my sisters did these cruises called ‘Sail With The Stars.’ They were the main event… other than that, never.”

These days the actress, who has been nominated for multiple awards for her role in Martha Marcy May Marlene, still sees her sisters regularly. “Mary-Kate and Ashley have celebrated my birthday with me every year since I’ve been in New York, my last four birthdays, and it’s been so special,” she said.

On the menu for such a celebration? Perhaps Elizabeth’s favorite food: Brussels sprouts. She admits, “I am obsessed with them.”

Aside from happy occasions, the young actress takes comfort knowing her sisters are around just in case heartbreak should come knocking. She added, “Or when you have a fight with a boyfriend or a friend, or whatever, they’re here.”

Be sure to check out the March issue of ASOS Magazine for more with Elizabeth Olsen!