A sassy, smart and satisfying novel, Bond Girl, is a delicious debut about what it’s really like to be a woman on Wall Street. Author Erin Duffy would know — she spent over a decade working as a bond
trader.

After being laid of from Merrill Lynch, author Erin Duffy penned a dazzling debut novel that has the literary world buzzing. 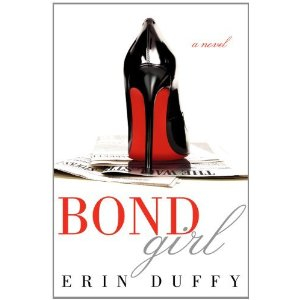 When other little girls were dreaming about becoming doctors or lawyers, Alex Garrett set her sights on conquering the high-powered world of Wall Street. And though she’s prepared to fight her way into an elitist boys’ club, or duck the occasional errant football, she quickly realizes she’s in over her head when she’s relegated to a kiddie-size folding chair with her new moniker “Girlie” inscribed in Wite-Out across the back.

No matter. She’s determined to make it in bond sales at Cromwell Pierce, one of the Street’s most esteemed brokerage firms. Keeping her eyes on the prize, the low Girlie on the totem pole will endure whatever comes her way. Even if that includes: trekking to the Bronx for a $1,000 wheel of Parmesan cheese, discovering a secretary’s secret Friday night slumber/dance party in the conference room, fielding a constant barrage of “friendly” practical jokes, learning the ropes from Chick, her unpredictable and slightly scary boss, babysitting a colleague while he consumes the contents of a vending machine on a $28,000 bet, or eluding the advances of a corporate stalker who’s also one of the firm’s biggest clients.

Ignoring her friends’ pleas to quit, Alex excels (while learning how to roll with the punches and laugh at herself) and soon advances from lowly analyst to slightly-less-lowly associate. Suddenly, she’s addressed by her real name and the impenetrable boys’ club has transformed into forty older brothers and one possible boyfriend. Then the apocalypse hits, and Alex is forced to choose between sticking with Cromwell Pierce as it teeters on the brink of disaster or kicking off her Jimmy Choos and running for higher ground.

From page one, you’ll be sucked into Bond Girl, a gripping novel with a heroine you’ll cheer for, a story you’ve never read before, written by an author who leaves you wanting more. Don’t miss our Erin Duffy Q&A.