We thought American Idol‘s biggest competition would eventually come from the ultra-cool show The Voice, but there’s a bigger threat on the horizon — the nerds of The Big Bang Theory.

For 10 seasons, American Idol has managed to keep our interest with a mix of really bad auditions and surprisingly good undiscovered talent — but that was then and this is now. 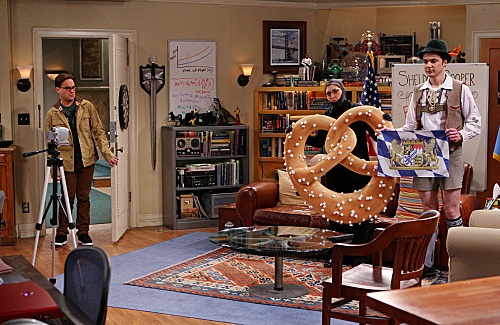 Season 11 is facing a dip in the ratings and a new opponent that we absolutely love but never saw coming: The Big Bang Theory.

Jim Parson’s has won two Emmy Awards and a Golden Globe for his portrayal of Dr. Sheldon Cooper on TBBT, while Johnny Galecki managed to snag his first GG nomination this year — proof that the show has slowly, but surely, become a force.

The show also recently reached its 100th episode, but that’s not all — it has consistently beat AI in the 8 p.m. “common half-hour” for the last two weeks.

Let’s talk about this, keeping in mind we’re referring strictly to the head-to-head battle for the 8 p.m. “common half-hour.”

The Big Bang Theory has been breathing down the neck of American Idol, winning the ratings war in the Thursday, half-hour time slot (8 p.m. EST.), making it the first time a series has managed to slay the singing giant.

To say that it’s stealing a few adults is an understatement.

According to a press release from CBS, Nielsen ratings for Jan. 26 showed the nerdy crew, “Topped American Idol in adults 18-49 for the second consecutive week in the common half-hour and also placed first in viewers, adults 25-54 and adults 18-34.”

The Big Bang Theory has always been a fantastic show with a special pocket of fans. Its accolades have been creeping up each year, so American Idol might want to watch its back as it pertains to the “common half-hour.”

Not only do the people at American Idol have to worry about Thursdays, they have to start prepping for the possibility that viewers might make a choice between the Fox show and The Voice, which airs on NBC beginning Monday, Feb. 6 (special premiere episode Feb. 5 after the Super Bowl).

Yes, we’re aware the shows are not going head-to-head, but viewers could decide they only want to watch one singing competition show each week, and some viewers could jump to Mondays.

We’ll be curious to see if The Big Bang Theory outperforms American Idol this Thursday, Feb, 2.

Do nerds rule your world?