Brandi Glanville claims she and Gerard Butler hooked up, he says, “Who?” To no surprise, she’s not happy her most-famous hook-up is denying the boot-knocking ever went down. 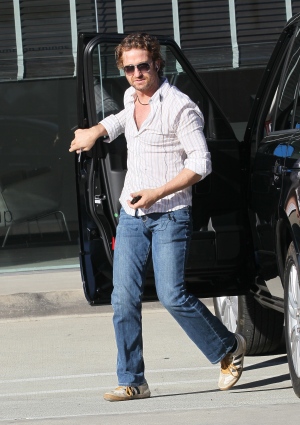 Gerard Butler is making a quick enemy of alleged hook-up, Brandi Glanville. The actor, whom she rated an 11 out of 10 between the sheets, has publicly denied even knowing who she is!

It all started earlier in the week when Brandi Glanville told Watch What Happens Live host Andy Cohen about her multiple rendezvous with Gerard Butler. During the interview the ex-wife of Eddie Cibrian was asked, “Who is the most famous person besides Eddie Cibrian that you have hooked up with?”

“Was that more than once?” she was asked.

“It wasn’t a one-nighter,” Glanville explained. “It was like a little week of fun.”

Yet, Thursday, when the inquiring cameramen for gossip site TMZ caught up with Gerard Butler, the 42-year-old sang a different tune.

In reaction to Butler’s denial Glanville angrily tweeted Friday morning, “I don’t lie so he can suck it… I’m telling the truth that is all I will say.”

She later spoke to Rumor Fix to clear the air, saying, “(Gerard) called me last night and told me he said it. He is upset because he is a private person. I don’t lie, so I don’t really care.”

Who do you believe in the Gerard Butler/Brandi Glanville he said, she said case?