The family and friends of Amy Winehouse are getting heated over an homage to the late singer at a Jean Paul Gaultier fashion show. Was their tribute terrific or tasteless? 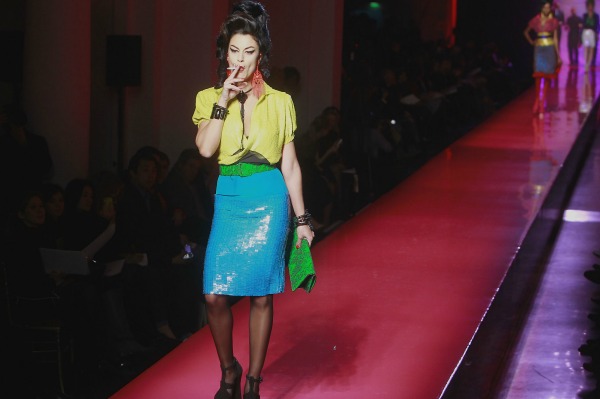 Fabulous fashion or tasteless trash? The family and friends of Amy Winehouse are calling Jean Paul Gaultier’s homage to the late singer the latter.

The designer made the tribute to Winehouse and her unique style at a runway show in Paris earlier this week, and while some called it chic glamour, Amy’s father Mitch Winehouse was appalled.

Amy Winehouse biopic: Dad says no, no, no >>

In a statement to The Sun, Mitch added, “The family was upset to see those pictures. They were a total shock. We’re still grieving for her loss, and we’ve had a difficult week with the six-month anniversary of Amy’s death.”

“To see her image lifted wholesale to sell clothes was a wrench we were not expecting or consulted on… We’re proud of her influence on fashion but find black veils on models, smoking cigarettes with a barbershop quartet singing her music in bad taste,” he said.

Models were shown smoking, drinking and generally behaving badly. Mitch complained that Gaultier portrayed “a view of Amy when she was not at her best, and [glamorized] some of the more upsetting times in her life.”

Kelly Osbourne, one of Amy’s BFFs who also happens to co-host E!’s Fashion Police, found herself between a rock and a hard place but made it clear where her loyalties lay.

“Although @JPGaultier was paying homage to my friend & icon to the world, I found it to be lucratively selfish and distasteful,” Osbourne tweeted. “Exploitation=evil.”

Amy Winehouse died in July 2011 after a long struggle with drug and alcohol abuse. She was 27 years old.