David Arquette is heading to Cougar Town. The actor is set to guest star on a future episode alongside estranged wife Courteney Cox. He’ll rub elbows with the cul-de-sac crew as they prepare for a very special occasion. Someone’s getting hitched! 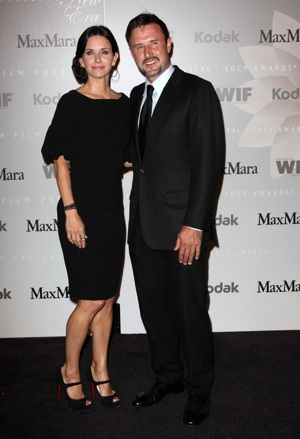 Courteney Cox and David Arquette are the perfect example of friendly exes. The separated husband and wife have put their differences aside for the good of their child and careers.

TVLine is reporting that Arquette will make a guest appearance on an upcoming episode of Cox’s show, Cougar Town. The series is gearing up for its third season premiere and Arquette has landed a plum role in its finale.

He’ll play a hotel concierge, who is at the beck and call of the cul-de-sac crew during a very special day. What’s so special about it? [Spoiler alert] Jules (Cox) and Grayson (Josh Hopkins) are getting married!

Arquette is no stranger to the Cougar Town set. The actor serves as one of the show’s executive producers alongside Cox and Bill Lawrence. It was only a matter of time before he made a guest appearance.

Arquette and Cox have shared the big and small screen on several occasions. The pair is best known for co-starring in the popular Scream franchise, which brought them together 16 years ago. Arquette also made a guest appearance on Friends back in 1996, where he played a love interest for Lisa Kudrow‘s Phoebe.

Over the past year, the actor has had a personal and professional makeover. He checked into rehab, got sober and resurfaced with an impressive run on Dancing with the Stars. Now with a guest spot on Cougar Town, Arquette’s future is looking brighter than ever.

Grab your wine, Big Carl is back!