Matt Bomer is joining the cast of Glee. The actor has signed on for a guest spot, where he’ll belt out a tune and bust a move. Bomer is set to play the older brother of one of show’s singing studs. Who’s his handsome kin? 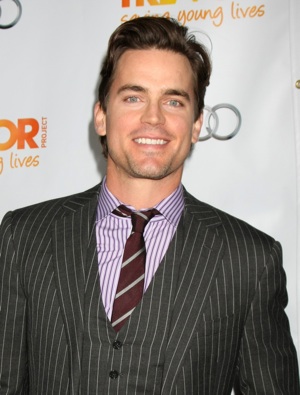 Glee‘s casting department has done it again. Last week, we learned that veteran actor Jeff Goldblum signed on to play one of Rachel’s (Lea Michele) dads, and now Matt Bomer is joining the party.

Bomer has been tapped to play a relative of one of the show’s most popular characters — Blaine (Darren Criss).

According to TVLine, Bomer will star as Blaine’s older brother, which will give viewers their first look at another member of the Anderson clan. Surely, they can’t all be great singers with soulful eyes. Can they?

Bomer is expected to perform a duet with his on-screen sibling, giving him the opportunity to flex his musical muscle. The actor is no stranger to theater, and has some serious pipes.

This won’t be the last time Bomer works with Glee creator Ryan Murphy. The director recently cast the actor in his big screen adaptation of Larry Kramer’s award-winning play The Normal Heart. The film will center on the HIV/AIDS crisis in New York City during the early 1980s. Oscar-winner Julia Roberts and The Big Bang Theory‘s Jim Parsons are also set to star.

Bomer’s career is on a roll. By day, he headlines White Collar, which is one of USA’s most successful shows. And by night, he has supporting roles in films such as In Time and Steven Soderbergh‘s stripper flick Magic Mike. Bomer is a busy boy!

The actor is expected to make his Glee debut in April. Can you wait that long?

What do you think of Matt Bomer playing Blaine’s brother?