We’re getting our first look at the trailer and posters for the upcoming ensemble comedy What to Expect When You’re Expecting. The verdict? It looks hilarious! 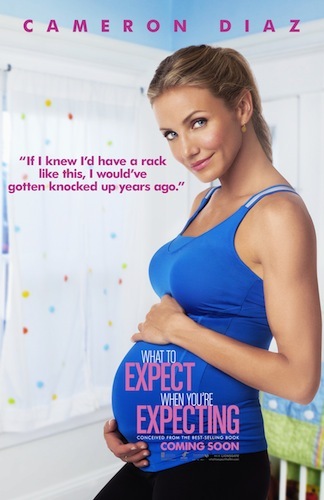 It’s not every day that a movie turns pregnancy, childbirth and parenting into a hilarious affair, but the upcoming What to Expect When You’re Expecting looks to do just that.

The film — based on the perennial New York Times bestseller — follows five couples as they face the challenges of parenting. We were pumped for this film’s all-star cast when it was announced earlier this summer. Now, we’re getting the first look at the pregnant stars like Cameron Diaz, Anna Kendrick and Elizabeth Banks in the film’s official posters and trailer.

“If I knew I’d have a rack this awesome, I’d have gotten knocked up years ago,” Diaz — as television fitness guru Jules — tells her boy toy Evan (Matthew Morrison).

The film also shows off the not-so-awesome side of impending motherhood.

“I just wanted that glow,” Banks’ character Wendy tells an audience of women. “Well, I’m calling it: Pregnancy sucks. Making a human being is really hard.”

See all the posters for the film featuring Anna Kendrick, Jennifer Lopez and Elizabeth Banks >>

While we’re pumped for the ladies in the film, it looks like the guys are really going to steal the show. Hot male stars like Joe Manganiello, Chris Rock and Chace Crawford tell it like it is.

“I picked up the wrong baby from daycare,” another father boasts.

We’ll have to wait a few more months to get our on-screen baby fix — What to Expect When You’re Expecting hits theaters on May 11.

See the trailer for What to Expect When You’re Expecting