Gwyneth Paltrow and Kelly Rowland can rest easy: The hunt is still on for Blue Ivy Carter’s godmother. Gayle King has shot down online ramblings that alleged media mogul Oprah Winfrey had been appointed the godmother of Jay-Z and Beyoncé’s baby girl. 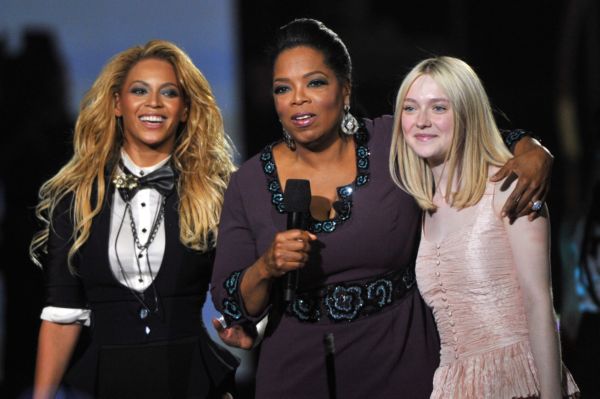 So much for a lifetime of lavish birthday bashes filled with all of “Oprah’s Favorite Things!”

The blogosphere erupted Thursday, hot on the heels of the scoop that Jay-Z and Beyoncé were pulling out all the stops to snag billionaire media queen Oprah Winfrey as godmother of their newborn daughter, Blue Ivy. The “Fairy Godmother” whispers took flight when Media Takeout published a scoop, which claimed that Bey and Jay — who welcomed Blue on Jan. 7 — chose the semi-retired Queen of Talk, 57,  to serve as their baby’s godmother after growing “close” to her over the years.

Alas, it was not to be. O’s bestie has stepped forward to put the kibosh on the rumors.

Gayle King, whose status as Oprah’s number two would make her privy to such scoops, has denied the report. According to the breakfast show hostess, Oprah’s been so busy traveling and pulling together the first graduation at her African school that she hasn’t even had time to send baby Blue an appropriate “Welcome to the World” present.

“It’s absolutely not true that she’s the godmother,” King retorted during Friday’s edition of the recently revived CBS This Morning. “She’s friends with them, of course and likes them both very much. She’s working on sending them a baby gift. She hasn’t even had time to send a baby gift because she’s been away.”

Blue Ivy is just shy of 3 weeks old, but she’s already got an impressive list of achievements to her name. She’s the youngest person to make it on to the Billboard music charts for appearing in daddy Jay-Z’s single, “Glory.”

There’s even a strain of marijuana named after her.

Add to that the most powerful godmother on the Planet and you’ve got a pretty good recipe for the “perfect life!”

Oh well, there’s always Kelly Rowland. Or how about Goop goddess Gwyneth Paltrow? Nothing says godmother material like an Oscar winner who also knows her way around a kitchen.