He’s lost his chiseled abs — but there’s always his new sports car! According to reports, Nick Cannon was recently on the receiving end of some very swanky swag from his superstar wife Mariah Carey. 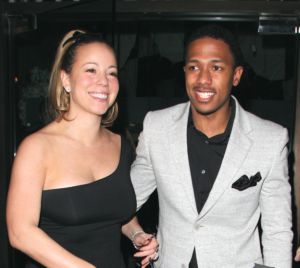 What is this we hear about Mariah Carey buying hubby Nick Cannon a “Get Well Soon” Ferrari priced at $300,000 smackers?

The rapper-turned-radio/TV personality is on the mend after being hospitalized with mild kidney failure last month.

According to Media Takeout, Carey forked over a fistful of dough on a pricey new whip for hubby Nick. Mr. Mariah was photographed zipping around Tinseltown in the slick new ride earlier this week.

Madame Butterfly sure does know how to spoil a guy!

Nick and Mariah’s first family vacation to Aspen, with twins Monroe and Moroccan, was cut short when Cannon’s kidney tuckered out a few days after Christmas. He returned to the hospital for a “scheduled procedure” on Wednesday.

These days, Nick’s feeling a lot better. But he can’t help but fret over his appearance: Apparently, the Rollin’ with Nick Cannon morning show host has lost a bit of muscle tone in the wake of his medical emergency.

“Getting back in shape is going to be tuff, the DR said because of my condition my body can’t process protein and that’s what builds muscle. Time to work smarter not harder… but I got to get right by the time America’s Got Talent starts!” Nick tweeted this week.

“It’s going to be difficult to get my six pack back on this Renal Diet. No muscles, skinny with a gut is not fresh,” he later added. “Right now, n my tank top I look like Samuel L. Jackson in Black Snake Moan #needtogetbackinshape.”