Drew Carey has broken off his engagement with his girlfriend of five years — but rather than cry himself to sleep, The Price is Right host has already moved on with a new lady. 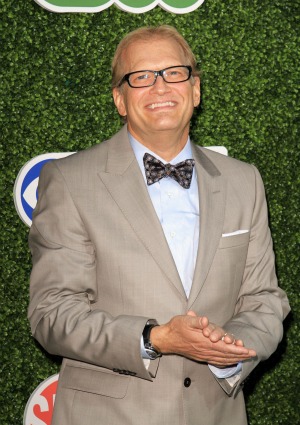 Drew Carey has dropped the dead weight — and we’re not talking about his 80 pound fat loss. The Price is Right host has confirmed he called off his engagement to longtime girlfriend Nicole Jaracz, and there appears to be one very blonde reason behind the split.

Carey’s rep confirmed the breakup to People magazine. “He and Nicole still have a great deal of love and affection for one another,” the rep said in a statement. “He will still be very involved with their son’s life.”

Jaracz has a six-year-old son whom Carey has helped raise and was part of his weight loss inspiration. “I couldn’t keep up with him,” Carey told Parade at the time. “I’d be like, ‘Connor, I can’t,’ and he’d say, ‘C’mon, Dad!’ That was a terrible feeling. I thought, ‘I’m never going to see him graduate high school.'”

The couple got engaged in 2007 but never set a wedding date.

While Carey’s statement included no details on the reason behind the split, it might have something to do with the hot blonde Carey was spotted with at a soccer game between the U.S. national team and Venezuela in Arizona on Jan. 21, 2012.

According to RadarOnline, Carey flew model/actress/jewelry designer Kelley Whilden out to the game via private jet. Whilden confirmed she was on her way to the game on Twitter, writing that day, “Just arriving to van nuys airport en route to US Men’s Soccer vs Venezuela :))”

Whilden seems to be completely head-over-heels, gushing on her Twitter page, “When someone changes your life… it’s as if everything that came before goes POOF. JUST….like…that.”