Susan Sarandon plays mother to couch potato Jason Segel in the new comedy that feels a lot more like a drama in Jeff, Who Lives at Home. 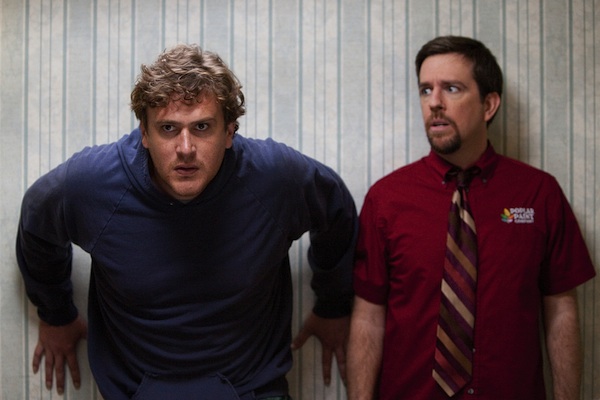 He lives with his mother. He’s a grown man. We’ve seen that before, right ladies? Well, Jeff, played by Jason Segel (The Muppets, How I Met Your Mother), thinks if you trust in fate, your destiny will be as it is supposed to be.

Feels like it has some merit, right? At least, to him it does. This mindset is the only thing keeping this fate-obsessed dreamer engaged in life, if you can call living in your mother’s basement a life.

Everyone else, including his mother, played by quirky and loveable Susan Sarandon, thinks Jeff should move out to start creating a life of his own. Jeff begs to differ, and the two have a relationship built on mixed expectations.

When our doughy hero becomes a shoulder to cry on for his seemingly successful and put-together brother Pat, played by Ed Helms (The Hangover, The Office, Cedar Rapids), things take a turn that no one expected.

Words of wisdom from a couch potato

The guy who doesn’t do a thing all day actually knows more about life than anyone dares to think. When Jeff decides to help Pat spy on his wife, things get interesting. The question about whether your destiny is planned, or if it’s in you to make a change in your life is one that affects us all.

Segel and Helms tackle this question of life and fate in the new quirky comedy from writer/director Jay Duplass. Judy Greer (The Descendants, 13 Going on 30, The Village) and Katie Aselton (The Freebie, The League) co-star in this dramedy about finding your way in life even if everyone thinks you’re misguided.