Though he plays a tough guy in One for the Money, Jason O’ Mara is really a softie at heart, a fact we quickly discovered when he shared his real life love story with SheKnows.

Jason O’Mara is your typical action heartthrob… a little scruffy, a little scrappy, all studly.

But what Katherine Heigl‘s character in One for the Money learned, and we too when we sat down with the sexy Irishman, is this undercover bad-boy is really a big teddy bear. 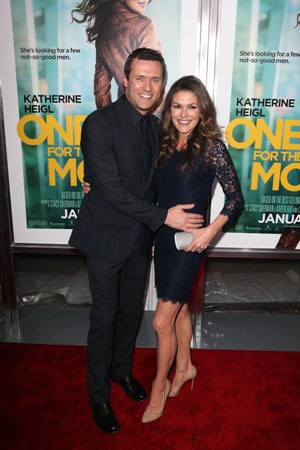 More than looks, Jason O’Mara is the romantic type and he told SheKnows exactly how he proposed.

And that appears to be true! O’Mara and wife Paige Turco have been together for almost a decade, and he’s still smitten.

“I go for strong and assertive [women],” O’Mara told us. “As my wife would attest, she knows what she likes, and I like a woman who knows what she wants.”

Katherine Heigl wows at One For the Money premiere >>

O’Mara keeps her happy by regularly showing her how much he cares. When asked what the two have planned for Valentine’s Day, he told us he tries to make every day special.

“We try to have romantic evenings at other points in the year, not just Valentine’s Day,” said O’Mara. “I tend to get a gift, and go out to dinner, but what we like to do is special things throughout the year.”

So what’s the sweetest thing this stud has ever done? O’Mara let us in on the couple’s most intimate moment…

“We went to Jamaica right after our first nine months together and I bought a ring,” O’Mara told SheKnows. “There was a pier and a beach… and I walked my wife down and I told her to wear all white and I was wearing all white.”

“I walked her down this rickety pier and at the end was silver service, a white table cloth and a waiter. We had dinner at the end of this little pier, pitch black, just the stars above us. At the end of dinner, I got down on one knee and proposed to her. And she said ‘Yes’, the fool! That’s my big romantic story.”

Fool? We would say she’s one lucky gal!