Fox has another hit on its hands. Wednesday night, the network aired a special preview of their new drama Touch, which debuted to much fanfare. 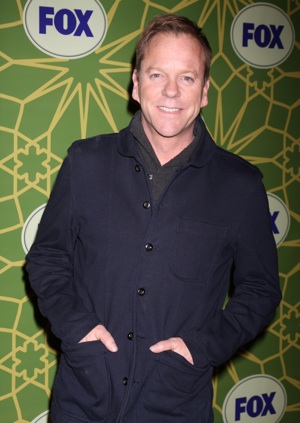 Kiefer Sutherland‘s still got the “touch.” After taking a short hiatus, he’s back on the small screen. The actor stars in Fox’s new supernatural drama Touch, which like 24, is a ratings hit.

That’s the second largest premiere for a new drama, behind ABC’s Once Upon a Time, which opened with 12.8 million.

According to Hitfix, American Idol raked in 19.5 million viewers in the 8 p.m. time slot, giving Touch a nice lead-in. The drama retained a good 61 percent of the reality show’s audience and held it for the next hour.

Since ABC opted for a night of repeats, it helped even the playing field. With Idol and Touch, Fox had a solid chance of ruling the night. But unfortunately, CBS had an ace up its sleeve with new episodes of Criminal Minds and CSI.

Criminal Minds celebrated its 150th episode (with a solid 13.9 million viewers), while CSI said goodbye to original cast member Marg Helgenberger after over a decade on the show. Over 14 million tuned in for her swan song, which easily won the 10 p.m. time slot. There wasn’t much standing in its way due to repeats of Law & Order: SVU and Revenge.

If you liked what you saw of Touch‘s winter preview, be sure to tune in for its official debut. The show returns to the Fox line-up Monday, March 19.

Mark your calendars! Kiefer will be waiting.