Singer Cee Lo Green is reportedly one of the music superstars tapped for a guest appearance during Madonna’s halftime performance at next month’s Super Bowl. 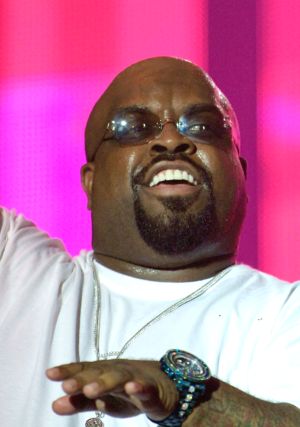 Break out your acid-washed jeans and lace gloves, Gridiron fans. In case you haven’t heard, the Material Girl is going to the Super Bowl.

The Queen of Pop has reportedly commissioned a reinforcement with a famous name to join the sports spectacular: Cee Lo Green!

The Insider has gotten its hands on a hot little scoop that claims the flamboyant panelist on NBC’s The Voice is one of the guest artists who will join Madonna’s Super Bowl stage show next month. The “Forget You” singer has been quietly traveling to the Big Apple to practice his routine with Madge for the past two weeks, according to the word on the curb.

Cee Lo is expected to bring a new sound to some of Madonna’s classic hits, snoops say. (We can’t wait to hear what he does with “Borderline!”)

In fact, Cee Lo will feature prominently on the tube this Super Bowl Sunday. In May, NBC revealed that his breakout hit talent show had nabbed the coveted time slot after the 2012 NFL championship game.

It’s only fair. After all, The Voice premiered in April and quickly became the number one-rated new series of 2011 among adults 18-49. The singing competition is second only to American Idol among the top-rated shows on broadcast television; ABC, CBS, NBC, FOX and The CW.

Whispers that Madge would bring her horse and pony show to the biggest football game of the year first surfaced in October. The NFL and NBC made the news official during last month’s Sunday Night Football match-up between the New Orleans Saints and the Detroit Lions.

Madonna has partnered with a creative team from Cirque du Soleil to create what the NFL and NBC are billing as “a signature performance.”

The “Express Yourself” songstress will succeed a host of other musical superstars — including Prince, The Who, The Black Eyed Peas and Bruce Springsteen — who have provided the Super Bowl halftime entertainment in recent years.