Vanessa Paradis has finally taken a stand against rumors that she and longtime partner Johnny Depp have split and fully denies the rumors. 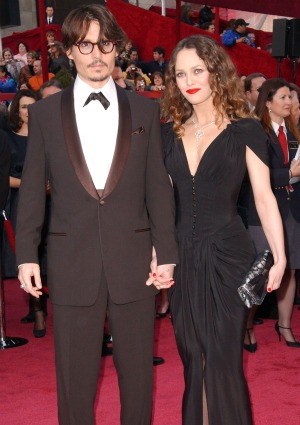 Sorry ladies, but you’ll have to find some new prey: Johnny Depp isn’t single after all.

After remaining somewhat vague about the state of their union in her last interview, Depp’s longtime partner and baby mama Vanessa Paradis finally set the record straight about the breakup rumors that have recently plagued the couple.

“People say we are buying houses in the middle of nowhere, or that we have 52 houses in France,” Paradis said of the constant rumor mongering.

“And that is along with saying we split up every winter and get married every summer, and that I’m on my twelfth pregnancy.”

So why address this rumor and not the others? “All that is not too serious, but this latest one is a rumor which could cause a lot of harm to my family and my children,” she said.

Depp has yet to comment on the rumors of the split, but now it seems he doesn’t have to.

The rumbling started when media noticed Depp was appearing at events without Paradis at his side more and more. Sources said the pair was “living sad, separate lives” and if they had not already split, they were definitely on the verge.

Good to hear that one couple in Hollywood is surviving!