Miley Cyrus gets a bit naughty with a well-endowed cake at her boyfriend’s birthday party. 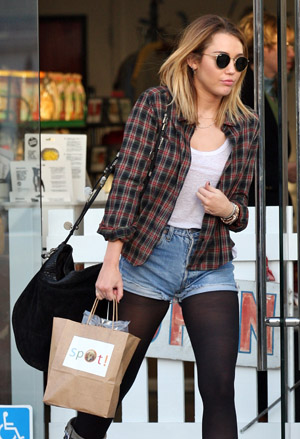 Miley Cyrus sure can’t stay out of trouble when it comes to sugary sweets. The girlfriend of Hunger Games star Liam Hemsworth was photographed over the weekend getting saucy with a giant cake shaped like a man’s nether regions.

The cake wasn’t for her, though — it was in celebration of Hemsworth‘s birthday. We’re not quite sure why he received the phallic cake — let alone a, ahem, large one.

It sure does look like she’s having a good time — and spies told TMZ she was having a grand ole time drinking and dancing at the party, held at Club Icon in Downtown Los Angeles.

We’ve reached out to Cyrus‘ rep to get more on the story.

The former Hannah Montana star got into trouble a couple of months ago for her comments about another cake — her Bob Marley birthday cake.

“You know you’re a stoner when friends make you a Bob Marley cake — you know you smoke way too much f***ing weed,” she joked in the video, taken at her 19th birthday party in November.

However, pal Kelly Osbourne blasted the stoner rumors, writing that it was all a joke about her salvia scandal in 2010.

“[L]et me make something very clear after @MileyCyrus salvia incident we started calling her bob miley as a JOKE! the cake was also A JOKE!” she tweeted. “[I]t makes me sick that @MileyCyrus so called ‘friends’ would sell her out and lead people 2 believe she is someone that she is not!”

“[U] guys if @MileyCyrus is not recording/filming/touring she is works everyday how could she possible do all that if she was a stoner! #think.”

As for Hemsworth’s cake? We just hope he wasn’t jealous of all the attention his gal pal gave his well-endowed dessert.