Rihanna went back under the tattoo gun on Tuesday night. Find out what she got inked on her body this time! 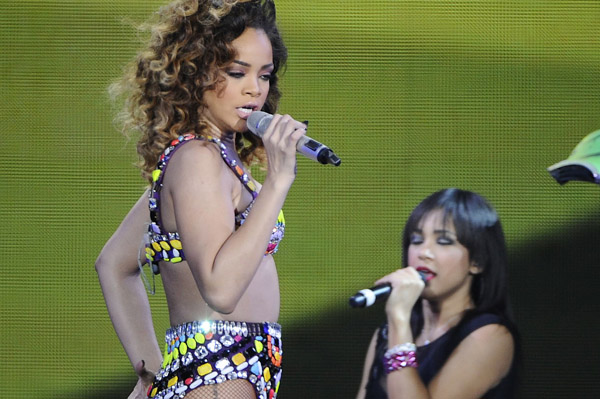 Rihanna can’t seem to get enough ink. The “You Da One” singer tweeted about her Tuesday night trip to a tattoo parlor and showed off some photos of her new body art.

“All these b***hes screaming that 2pac back,” she wrote, along with a photo of the words “Thug Life” tattooed across her fingers in pale pink ink.

She also posted several more photos of her at the tattoo shop, including one of her getting yet another tattoo and another with Machete actor Danny Trejo.

“Tat my f**kin name on u girl so I know its real!!!” RiRi tweeted with the tattoo photo. She didn’t reveal what her new ink looks like, but later posted about it on the micro-blogging site.

Rihanna is no stranger to a tattoo gun — she has numerous designs on her body, including stars on her upper back and neck and a gun tattoo on one of her sides.

The ex-girlfriend of Chris Brown makes no secret of her love for ink.

“I like hanging in tattoo shops. When I am in New York, after all the photo shoots and performances, when I should be resting, sometimes I get dressed and go to the tattoo parlors in SoHo and just hang out. I am so intrigued by tattoos,” she told Peach magazine in 2007. “It’s an entire culture, and I study it. Sometimes I go with friends or just by myself. I get bum-rushed, but I don’t care. I don’t take security.”

Whatever makes you happy, Rihanna.