Demi Moore has been hospitalized for “exhaustion” — but are drugs and anorexia really to blame? Insiders say yes. 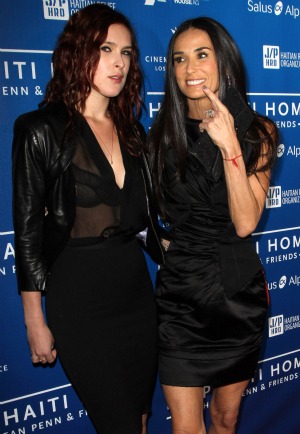 No one can deny Demi Moore has had a rough year. Rumors of Ashton Kutcher’s infidelity reared their ugly head months before the straw that finally broke the camel’s back, when yet another woman stepped forward to say she had a fling with the star on the couple’s wedding anniversary.

It’s no surprise then that the actress might want a little help of the professional sort to get through it all. However, sources say that Moore’s troubles go deeper than her failed marriage.

An insider told RadarOnline that the actress suffered a seizure Monday night before being rushed to the hospital — and it was brought on by anorexia and drug use.

“She collapsed after having an epileptic seizure,” the source told RadarOnline. “Demi is in getting treated for anorexia, as well as other issues that caused her seizure.”

“She has not taken care of her health at all lately and has lost a ton of weight.”

The insider also said Moore is being treated for substance abuse, but did not elaborate on her drug of choice.

The stunning actress has been disappearing before our eyes since murmurs of her marriage problems surfaced, growing more and more gaunt at every public appearance.

Less than two weeks before her hospitalization, Moore was spotted partying with daughter Rumer Willis and her young pals at a Hollywood hotspot and getting frisky with 90210 actor Ryan Rottman.

“She found ways to touch him all night, and at one point when he was in front of her, she was grinding on his butt,” a witness told People magazine, adding that “his shirt came unbuttoned, and she started tickling his bare chest playfully.”

SheKnows is awaiting comment from Moore’s rep on the rehab allegations.