Star Jones has booked a guest appearance on The View for the first time since she was famously booted from the daytime talk show in 2006. Look for Star’s return on Feb. 22. 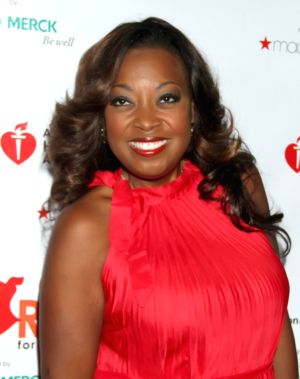 Star Jones is returning to her old stomping grounds — and it only took five and a half years!

The legal eagle, one of the five original co-hosts of The View, will return to the morning gabfest next month for the first time since she was famously fired in 2006.

The Celebrity Apprentice alum is making her return to The View to promote an awareness campaign about heart disease among women. Jones will discuss her involvement in the American Heart Association’s public information campaign, “Go Red for Women.”

In 2010, both show boss Barbara Walters and Jones underwent open heart surgery to repair faulty heart valves within two months of each other.

Women are asked to wear red on Feb. 3 to support heart patients.

Jones’ final appearance as a View-ster came on June 27, 2006. That’s when she told fellow panelist Walters, Meredith Vieira, Joy Behar and Elisabeth Hasselbeck that “after much prayer and counsel” she would not be returning to the program.

In reality, Star was fired from The View after controversy over her decision to use her position on the show to seduce investors and gain free swag for her lavish wedding to Al Reynolds.

There was also drama after she lost weight through gastric bypass surgery, but wouldn’t admit it. (She later confirmed this little tidbit.) In her 2008 memoir, Walters said Jones forced all of her co-hosts to lie about her surgery.

Star fired back by penning a novel, Satan’s Sisters, about the catty cast of a daytime talk show.

This isn’t the first View reunion for Jones. She appeared on Joy Behar’s now-axed HLN show last April, where she called her firing from the show “really probably the most emotionally destroying time of my life.”