No, we’re not talking about a werewolf — REAL wolves are hunting down Liam Neeson in the new thriller The Grey. 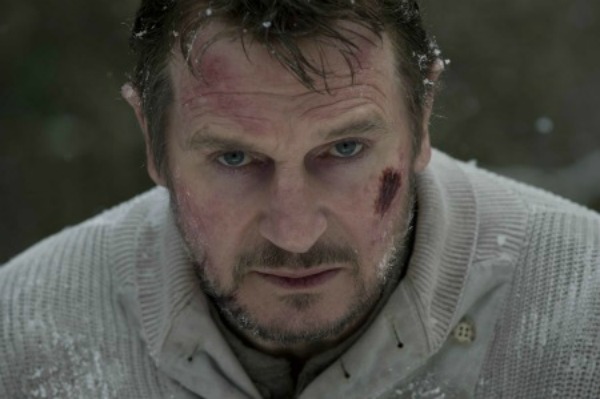 The Grey is a naturalistic thriller that keeps you gasping all the way through. Liam Neeson plays Ottway, a wolf hunter working for a petroleum company in Alaska. It’s Ottway’s job to eliminate these vicious man-eaters in order to protect the employees working outdoors. Toting a rifle, he is a perfect shot.

But Ottway is a conflicted man, struggling for a reason to live after leaving his wife. Then, after what must be the most harrowing plane crash scene ever created for film, Ottway finds himself with six others lost in the harsh Alaskan wilderness with survival the only thing on his mind.

In a deliciously dark twist of fate, the tables turn on Ottway. Without his rifle, the hunter becomes the hunted.

Almost like a having a sixth sense when it comes to wolves, Ottway suspects he and the other survivors have landed in the center of a wolf pack’s hunting territory. The malevolent wolves viciously mirror this reluctant hero’s own inner demons, making for a thoughtful, yet terrifying film. The action is riveting and I found myself gripping the arm of my seat numerous times.

There’s plenty of swift blood and gore, but the movie doesn’t rely on it to provide the entertainment. The thrills come from the watching what appears to be psychological warfare between Ottway and the wolves. It seems as if the wolves are well aware of his history and are determined to settle the score.

Neeson gives a stirring performance, traversing from broken man to fearless hero. Dallas Roberts as Hendrick and Joe Anderson as Flannery contribute to a strong ensemble cast. The cinematography will give you chills and get your blood pumping.

Be sure to stay through the end credits for an extra jolt.

Bottom line:  If you love to watch movies on the edge of your seat, go see The Grey.