She’s a breakout star of one of the biggest film franchises ever, but Kristen Stewart is far from an overnight success. Learn all about Kristen Stewart’s illustrious past and even brighter future as she steps into our star spotlight. 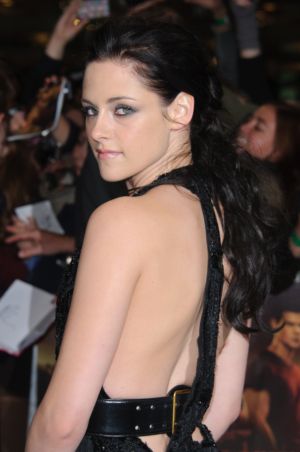 Kristen Stewart was born into a company family in a company town — with an LA upbringing in a clan who worked behind the camera. It was natural for the brunette beauty to believe she would do the same, but when an agent spotted her in her elementary-school Christmas play, her life plan changed dramatically.

Stewart landed her first film role at 9 years old: a nonspeaking part in The Thirteenth Year. She nabbed a major role in the critically acclaimed indy film The Safety of Objects, playing the tomboy daughter of a troubled single mom.

Next up was a role as the daughter of Dennis Quaid and Sharon Stone in Cold Creek Manor, a thriller that nabbed her another Young Artist Award. A starring role in Catch That Kid followed. Then came a role in Undertow and a critically lauded performance in the Showtime film Speak. Stewart had just turned 13, and The Twilight Saga was still years away.

The actress was still just gearing up. Between 2005 and 2008, Stewart appeared in no fewer than eight movies, including In the Land of Women and Sean Penn’s Into the Wild. All the acclaim added up to one incredible opportunity when Summit Entertainment announced she would play Bella Swan in Twilight, the first film in The Twilight Saga films based on Stephenie Meyer’s hugely popular young-adult novels. Stewart’s life would never be the same.

The success of the movies catapulted Stewart into a stratosphere of stardom that most actors never even dream of. Bonus: She met and fell in love with costar Robert Pattinson on set and finally admitted that the pair are a de facto couple in 2011, after years of not acknowledging it publicly.

Stewart quickly parlayed her Twilight success and higher profile into more film roles but focused on depth rather than on blockbusters. The Yellow Handkerchief, The Runaways and On the Road all gave the in-demand actress major roles.

While there is still one more Twilight movie to come — Breaking Dawn Part 2, due in 2012 — Stewart is busy filming Snow White and the Huntsman with Charlize Theron and is attached to the live-action adaptation of anime cult classic Akira.

It all adds up to one incredibly exciting and highly successful career for Kristen Stewart — and it’s only just begun.