The 2012 Oscar nominations were announced this morning. See what this year’s batch of maybe-honorees have to say about their moment in the sun! 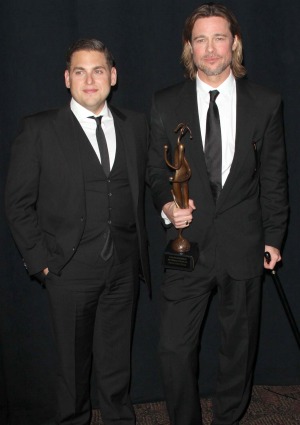 This morning’s 2012 Oscar nominations announcement held more than a few surprises, but no one was more surprised and grateful than the nominees.

Octavia Spencer, up for Best Supporting Actress for her role in The Help, was shocked and relieved after months of buildup.

“It’s numbing! There were no guarantees,” she said. “I didn’t think I was in it and then they said my name and it was just a sigh of relief.”

Meryl Streep, nominated for Best Actress for The Iron Lady, was as gracious as ever despite not winning Oscar gold since she nabbed a trophy in 1983 for Sophie’s Choice.

“I am honored to be in company with such beautiful artists, and touched deeply by my fellow actors for their generosity in giving me this acknowledgment,” she said.

Meryl Streep swears her way through her Golden Globes speech >>

One of the most surprising names read at this morning’s ceremony was Jonah Hill, who is up for Best Supporting Actor for Moneyball. In his typical funny manner, Hill said, “I am so humbled, appreciative and in shock about this incredible honor. I’d like to thank the Academy, Sony Pictures, the cast and crew of Moneyball, Brad Pitt, and, most of all, our brilliant director Bennett Miller. To have this kind of recognition -– it means I should do more dramas. I don’t know if there could be a bigger sign. I was nervous at the Golden Globes, but my category was [early], so I lost right away and then I was able to have a great time. So, hopefully, I can just lose right away again.”

Fans ticked at Jonah Hill for not being Brad Pitt >>

His Moneyball co-star Brad Pitt was also nominated, and mentioned Hill in his official statement.

“This is an extraordinary honor,” Pitt said. “I am dizzy with joy… and caffeine. Considering both films, Moneyball and The Tree of Life, nearly didn’t make it to the screen, this is especially sweet. And I’d like to thank all the artisans and craftsmen who gave their best to each film. I am especially over the moon for Jonah (and the other Moneyballers acknowledged today), Terry Malick and the tribute this is to Billy Beane and the Oakland A’s organization. My congratulations to all the nominees… pancakes for everyone.”

Hopefully he made a few extra pancakes for Angelina Jolie, who was crying in her Cheerios this morning after her directorial debut In the Land of Blood and Honey was totally shut out.