SheKnows brings you this exclusive look at the true love story behind the romance in Big Miracle, the movie about whales and falling in love. 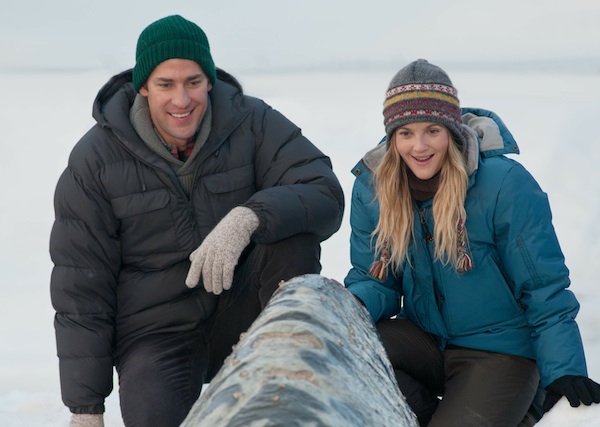 “This is a very personal story for us,” says Bonnie Carroll, former White House west wing staffer who fell in love with her husband during this extraordinary experience of saving three whales off the coast of Alaska in 1988.

Actress Vinessa Shaw (3:10 to Yuma, Eyes Wide Shut) plays the character based on Bonnie in Big Miracle, the romantic comedy about love in the snowy tundra of Alaska. Drew Barrymore and John Krasinski co-star.

Dermot Mulroney (The Grey, My Best Friend’s Wedding, About Schmidt) plays the character based on the man who will become Bonnie’s future husband, Tom Carroll. Mulroney and Shaw re-enact the love story that happened off screen nearly 20 years ago.

First, he heard her voice…

“A few minutes into the conversation, we said to each other, where have you been?” says Bonnie of the first phone call she had with Tom. She called him after learning about the trapped whales because she thought his expertise in the subject matter might help. The whales were saved, but that’s not the only positive thing to come out of the situation. Two people fell in love.

“The fact that it’s a true story is so romantic, that I can’t fathom that there is no definition of romance if this isn’t it,” says Drew Barrymore who plays Rachel Kramer in the film. Barrymore was overwhelmed with emotion when describing the story of these two strangers coming together under dire circumstances.

Then, they got married…

One thing led to the next and Bonnie and Tom ended up getting married in Washington in full regalia. These two really did get a Hollywood ending. SheKnows brings you this exclusive look at the behind-the-scenes story of true love that withstood the test of hard times.

Big Miracle is the screen adaptation of the book Freeing the Whales by Tom Rose about the rescue attempt of three grey whales. The film also stars Kristen Bell and Ted Danson.