Nickelback is finally fed up with the “everyone hates Nickelback” meme — and they’re fighting back on Twitter. 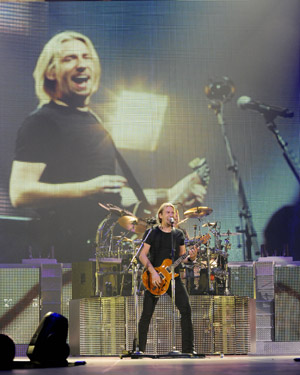 You know how everyone hates Nickelback? Well, the Canadian band is well aware that people are so vocal about their disdain that they’ve decided to fight back.

Chad Kroeger and the rest of the guys have taken to taunting their haters via snarky tweets.

“You ruin my day when I hear your music,” one user wrote to the band. “How else could we cause you so much torment? So worth it,” the Nickelback tweeter replied.

“Nickelback makes me want to chop my ears off,” another hater wrote. Nickelback didn’t miss a beat. “Did you do it yet? What’s the hold-up?”

We’re not exactly huge fans of the “Far Away” musicians, but this takes them up about 25 notches in our book.

“We get that all the time. We’ve never really been a critics’ darling or anything like that,” Kroeger told Billboard.com in November. He was referring to a petition to keep the band from playing the halftime show at the Detroit Lions Thanksgiving game. The petition received upwards of 40,000 signatures.

“The people speak. We sell a lot of records and fill a lot of arenas, and we don’t hear many complaints.”

And they are successful: Nickelback has sold 50 million albums around the world, complete with 17 top 10 hits. Their latest album, Here and Now, has the band exploring a “back to basics” sound, according to Billboard.

Maybe their Twitter retorts are part of that “back to basics” plan? It’s certainly entertainment — and other musicians agree.

“Your replies to the haters are killing me! Hilarious!” Chris Daughtry tweeted to the band on Sunday.